Ireland is made up of many faiths, of ever-fluctuating numbers. We meet some people who have recently switched religious allegience 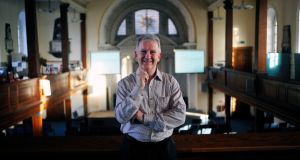 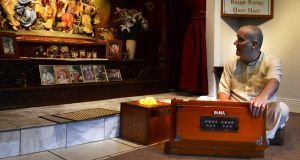 Praghosa, a devotee of Krishna at the Govinda's Kirtan Centre in Dublin.

‘Okay, what colour was Jesus?” asks Anwar, a young man in a kufi cap standing outside the GPO on O’Connell Street, in Dublin, where he is manning the Discover Islam stall. “He was from the Middle East. He was probably dark-skinned.”

“Yeah, probably,” says the older man holding out a battered paperback book about Jesus. “But that’s not the point!”

“It is the point!” says Anwar. “The man on the cover of that book is white. If they’ve got that wrong, what else have they got wrong?”

The argument goes on for 10 minutes. The Catholic retreats after the Muslim begins quoting from the apocryphal Gospel of Barnabas.

Anwar is in the business of creating converts, and he’s not the only one doing so in central Dublin on a recent weekday afternoon. Up the road on Henry Street, an evangelical preacher is trying to do likewise.

There’s a niche market for religious ideas in this country. Ireland might be, on paper, a predominantly Catholic country, but manyCatholics don’t believe in God any more.Although most of these have drifted away from the faith of their fathers, a smaller group have actively moved towards something else.

We talked to five people who have chosen, not been born into, their religion.


Philip Larraghy
Evangelical convert to the Church of Ireland
Philip Larraghy, a genial fiftyomething, tells me about “coming out” as a Christian 28 years ago. “It was a faith decision,” he says. “It’s about meeting the Holy Spirit in your life and, from that, changing your life. It’s life-changing.”

In his 20s, Larraghy would have described himself as a lapsed Catholic, but after meeting his wife, a member of the Church of Ireland, he began to take an interest in his faith. Larraghy and his wife are both affiliated to the evangelical “new expression” movement within the Church of Ireland. They worship at St Catherine’s, a young, socially engaged church in the inner city.

Every evangelical Christian has a story about how Jesus came into their lives. “Billy Graham the televangelist was doing two nights at the National Stadium and a friend asked me to help man the fire exits,” says Larraghy. “The first night Graham asked me was I ready to accept Jesus as my personal saviour. I just held on to the doors and didn’t move. The next day on the radio Mike Murphy was interviewing a Jesuit priest called Fr Bob McDougal, an amazing guy with an amazing story, who was speaking about having a personal relationship with Jesus. He asked Mike Murphy would [he] accept the lord Jesus Christ as his personal saviour. Murphy found the ad-break button but I sat in the car and I said ‘yes’.

“And that night when Graham asked me the same question I floated forward. I didn’t walk. In my head I floated. And from that moment I gave my life to Jesus Christ.”

Why was he resistant at first? “Because we’re all afraid to leave our comfort zones and that place where it’s a la carte for us. It’s like getting married. It’s a big commitment.”

He looks at me very intensely. “I love you in a very spiritual way,” he says. “Everything I do is out of love. I am not a religious person. What I do is not religion. It’s love. It’s the outward expression of the love I have for everyone. And it gives me energy.”

Friends and family, he says, were generally understanding when he converted. “People will say at cocktail parties or dinner parties, ‘Oh, Philip, shut up about that stuff, let’s talk about football,’ and I move on. People also come to me and say, ‘Would you pray about this for me?’ And I do.”


“Judaism doesn’t look for converts,” says Anne Walter, who converted in 1983 along with

her 86-year-old husband, William, a former Church of Ireland minister and Royal Navy chaplain. “It’s not that anybody’s nasty to you, but people talk bluntly. ‘Why do you want to do this? You don’t need to be a Jew to go to heaven. What on earth are you doing? Don’t bother – it’s very hard work.’ Some religions are like door-to-door salesmen, and Jews don’t do that. Jews try to keep away from that.”

Anne was formerly a Scottish Catholic while William is the son of a doctor from Newry. Their conversion came at the end of a nine-year process. “Converting to Judaism is not a thing you do suddenly,” says Anne. “Judaism isn’t about what you believe – it’s about what you do. There’s no bolt of lightning in Judaism. It’s a long and painful process. You learn the rules and regulations.”

The year they converted, the London Beth Din received 300 applications, of which only three would eventually be accepted. “Long odds if you’re a betting man,” says William. His first introduction to Judaism, he says, came in the 1960s when visiting a military prison in Portsmouth as a chaplain.

And he said, ‘We need a rabbi. D’ya know any rabbis?’ And I said, ‘No, not even a little one.’ So I went searching for a rabbi. A Jewish tailor near the barracks put me in touch with the only Jewish chaplain to the forces.”

William befriended him and before long was running events for the Jewish members of the forces and their families. “I was more and more impressed,” he says. “The so-called Old Testament always felt more real to me than the New. The New Testament was all very nice and airy-fairy and everybody loved everybody, but the Old Testament was down-to-earth. You had good heroes and you had some heroes who were not all that good. They felt like real people . . . I eventually came to the conclusion that there was nothing for me to do but to become a Jew.”

Conversion was a very difficult process. “Jews aren’t looking for converts,” says William. “They don’t trust them, quite honestly. I had to sign a piece of paper, carefully filed away, that I was converted at my own wish and without any encouragement or blandishment from the Jewish community. My instructor was very hard on me. But he was right, because a Jew has a very rough time ahead of him among non-Jews.”

William’s family weren’t pleased. “They still loved me, but they were totally embarrassed by it and just couldn’t relate at all to what I was doing,” he says. “And that really stayed the case. We’re still very friendly and we love each other but I’m the odd one.”

Anne’s family were more accepting. “I have a sister who’s a nun and her words were: ‘I don’t care what you do as long as you keep in touch,’” she says.

“revert” to Islam
“Some people say, ‘don’t talk about religion or politics.’ Well, they’re the only things I’m interested in talking about!” says Eoin Whelan, a Dundrum-born “revert” to Islam (in Islam, converts are called reverts because they are seen to be reverting to the true faith).

Several other Irish reverts I spoke to wished to remain anonymous. One rural bank manager talked movingly of his discovery of the faith, but didn’t yet want his colleagues to know about it.

Whelan has a red-tinged beard, a well-cut suit, black leather gloves and a Superman belt buckle. “My background is Catholic,” he says. “I was an altar server. My auntie is a nun in the Carmelite convent that backs on to the Clonskeagh mosque. My immediate family wouldn’t be religious but I completely believed in God.”

So he went looking for a faith. “I was ‘born again’ for a while. I visited a Methodist church. I read the Bhagavad Gita.”

Six years ago he started a discussion with a Muslim colleague about the existence of God. “She gave me an English Koran and I read it line by line and kept a notebook in which I wrote everything down. There’s a coherence to the Koran I couldn’t find anywhere else. I’d reached a point where I couldn’t argue any more.”

So he converted. How does one do that?

“There is a testimony of faith called shahada, which means to ‘bear witness’. You say that there is only one God and that Mohammad is his messenger. Then you’re a Muslim. There’s no baptism.”

He still has non-Muslim friends and will go to the pub for birthdays, but he doesn’t drink. He has no problem praying five times a day. “Other people take smoke breaks. I’m entitled to the same time, so I go and pray.”

He shows me some of his 28 tattoos, including a family crest and a Superman symbol. Tattoos are a controversial point in Islam. As part of his Islamic studies he argued the case for them, and several Islamic scholars, he says, agree with him.

evotee of Krishna
Members of the International Society for Krishna Consciousness, popularly known as Hare Krishnas, have long been a familiar sight in Dublin.

When I was growing up, Krishnas were regularly accused of cultism and brainwashing. Nowadays, Dubliners are more likely to associate them with good-value vegetarian food sold in Govindas, the vegetarian restaurants the movement runs.

Praghosa, formerly Paul Murphy, meets me in the Aungier Street branch of Govindas. He happily tells me of his own experiences, regularly quoting Sanskrit texts and explaining philosophical points. He moves his hands a lot as he talks.

“I don’t like the word ‘religion’,” he says. “Religion is man-made. God isn’t a Catholic or a Hindu or a Muslim or a Jew. God is transcendental to all these material designations.”

Born in Slough in England to Irish parents, as a teenager Praghosa wandered from the Catholic faith. He became a vegetarian in his early 20s to impress a girlfriend, and through his vegetarianism got a job at a branch of Govindas in London.

“When I started reading this philosophy, life just became very clear. I would have an argumentative, challenging nature, but I could see that what was being presented in these books I couldn’t challenge or defeat.”

Devotees of Krisha believe that they are eternal spiritual beings without beginning or end. They meditate, are strict vegetarians and they must also teach people about Krishna consciousness; hence the singing and dancing, and the distinctive clothes.

“The main reason we wear the clothes is so people will know, ‘Oh, there’s a Hare Krishna’. People laugh at first: ‘Those weirdos with the shaved heads and funny clothes!’ But increasingly there’s an appreciation and respect.”