Catholic bishops pile on the pressure over proposed abortion legislation

Joint statement expected from their summer meeting this week 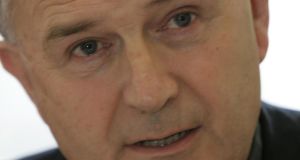 
The Catholic bishops will intensify pressure on the Government this week over the Protection of Life During Pregnancy Bill when they issue a joint statement in outright opposition to it. It will be a crucial element in what has been their most concerted campaign against any piece of proposed legislation in Ireland since the 1995 divorce referendum.

Over the weekend the third of their Choose Life 2013 leaflets opposing the Bill was read at Masses throughout the State. It described as “unreliable” assurances that it would provide very limited access to abortion in response to suicidal ideation and said it also failed to adequately balance the right to life of mother and child, unlike current law.

Leaflet campaign
The leaflet was part of a 10-week campaign by the bishops which began on May 22nd and continues until the end of July. It is being distributed every Thursday to parishes throughout the State by the Catholic Communications Office in Maynooth.

The bishops are in Maynooth today, tomorrow and Wednesday for their summer meeting which will be their last before the Bill is due to go before the Dáil next month. Their joint statement is expected to be issued either tomorrow or, most likely, on Wednesday.

It will reiterate their belief that human life is sacred from the moment of conception and to point out that the Government does not have to provide for abortion in Ireland to comply with the ruling of the European Court of Human Rights.

They are also expected to emphasise that it is never necessary to target the life of the baby in the womb to save the life of the mother and that international experience shows that once abortion is legalised, even in apparently very limited situations, it becomes more widespread than was first intended.

Free vote
Where the Dáil is concerned the bishops are expected to repeat calls for a free vote on the Bill, as made by the Archbishop of Dublin Diarmuid Martin at the weekend. Among the thousands who attended the “Vigil for Life” rally at Dublin’s Merrion Square on Saturday were Archbishop of Tuam Michael Neary, Bishop of Kilmore Leo O’Reilly and Bishop of Raphoe Philip Boyce.