In 1988 Dublin’s bishops ‘set him loose on the unsuspecting population of Stockton, California’ 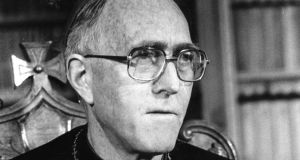 Murphy found that Dermot Ryan, archbishop from 1972 to 1984 “protected Fr McCabe to an extraordinary extent; he ensured, as far as he could, that very few people knew about his activities”

Chapter 20 of the Murphy report, “encapsulates everything that was wrong with the [Dublin] archdiocesan handling of child sexual abuse cases,” it said. Three former archbishops of Dublin are criticised trenchantly for their handling of the Patrick McCabe case.

The Murphy report found that: “Archbishop Ryan not only about knew about the complaints against Fr McCabe, he had a considerable understanding of the effects of abuse on children. This is one of the few cases in which he took a close personal interest.” It noted that a priest brother of Patrick McCabe’s, Fr Felim McCabe, was a friend of Dr Ryan.

Murphy found that Dr Ryan “protected Fr McCabe to an extraordinary extent; he ensured, as far as he could, that very few people knew about his activities; it seems that the welfare of children simply did not play any part in his decisions”.

McCabe was sent to treatment centres in England (1981) and New Mexico (1982), as arranged by then auxiliary bishop of Dublin Brendan Comiskey. In 1981 the archdiocese said “he had gone away for treatment for throat cancer” and asked for prayers for him. In 1982 it said he “has transferred to study further in the USA”.

The Murphy commission concluded, from a three-page confidential memo it had seen, that Dr Ryan “was fully aware, at that time, of the criminal nature of Fr McCabe’s misconduct and, further, he was aware that such misconduct was damaging to children”.

During the tenure of Dr McNamara the Murphy Commission found that Fr McCabe returned to Ireland in May 1986 from a Californian parish following “stories of inappropriate conduct”.

‘Unmonitored’
Murphy said that: “To the knowledge of the archdiocese, Fr McCabe stayed on in Dublin for the summer of 1986”.

“His activities appear to have been entirely unmonitored, despite the archdiocese’s knowledge that he had been declared a paedophile and despite its knowledge of many complaints against him. He moved from house to house and he had the use of a car.” That summer he abused a nine-year-old altar boy.

McCabe returned to the US but was back in Dublin by 1987 unknown to Dublin church authorities. He got a job in a school. When the archdiocese heard of this, the school was informed and he was removed.

In January 1988 a meeting of Dublin’s auxiliary bishops, attended by archbishop-elect Desmond Connell, was told that McCabe had assaulted a 14-year-old boy. Rome was asked that Fr McCabe “be reduced to the lay state as quickly as possible ‘otherwise immense scandal and damage will ensue both for the Church and the priesthood in this Diocese’.”

McCabe was sent to St Patrick’s psychiatric hospital in Dublin. While there, he told diocesan authorities he had secured a job with homeless adults at Stockton, California. McCabe left hospital in February 1988.

In one of its most damning conclusions, the Murphy report said: “The bishops decided to let him go to the USA. They, in effect, set him loose on the unsuspecting population of Stockton, California. There is no record that they notified the bishop of Stockton of his arrival.”

In May 1988 the diocese of Sacramento became aware of McCabe’s presence in California and, as the Murphy report put it, “assumed, wrongly of course, that the Dublin Archdiocese might not have been aware of his presence in Stockton.” Sacramento notified Stockton about McCabe.