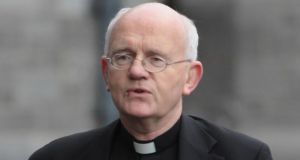 A bishop who was sharply criticised by an inquiry into the handling of clerical abuse allegations in the Dublin archdiocese had been “scapegoated”, an auxiliary bishop of Dublin told his funeral Mass yesterday.

Defending the memory of Dermot O’Mahony, who was also an auxiliary bishop of Dublin, Bishop Eamonn Walsh told mourners he had suffered in “a society that at the time ignored the spirit of equity”.

Bishop O’Mahony had been “a man of great integrity”, Bishop Walsh told the congregation in Shankill, which included the papal nuncio, Archbishop Charles Brown.

Bishop O’Mahony’s handling of complaints and suspicions of child sexual abuse was “particularly bad”, the report said, adding that he had been aware of complaints involving 13 priests. He resigned as president of the Irish Pilgrimage Trust, which brought disabled children to Lourdes, and was stood down from attending Confirmations.

Archbishop of Dublin Diarmuid Martin had received Bishop O’Mahony’s remains on Monday evening but was in Rome yesterday. His predecessor Cardinal Desmond Connell attended prayers with the remains before the removal.

“The personification of love and goodness and care was in the personality of this man and to be accused of no care for the most innocent and vulnerable of all was the deepest cut,” said Fr Murphy, a friend of five decades.

The dead bishop’s brother, Gerry, was sharply critical before the Mass, saying the archdiocese had not published a letter of apology his brother had written at the time.

On Christmas Eve 2009 Bishop Walsh and fellow auxiliary bishop of Dublin Ray Field offered letters of resignation following the report. Their resignations were not accepted by Pope Benedict.