Bishop Edward Daly will be remembered for ‘peaceful, courageous’ actions 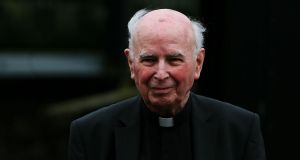 Edward Daly (82) famously waved a blood-stained white handkerchief as a symbol of ceasefire as he attempted to help a fatally injured demonstrator in Derry in January 1972. Photograph: Brian Lawless/PA Wire 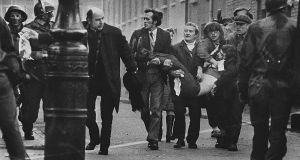 Dr Daly famously waved a blood-stained white handkerchief as a symbol of ceasefire as he attempted to help a fatally injured civil rights protesters during Bloody Sunday in Derry in January 1972.

Dr Daly served as Bishop of Derry from 1974 until 1994 when a stroke had forced him to retire.

He was taken to Altnagelvin Hospital last week suffering from a long term illness. He died in hospital surrounded by family.

There was be a reception for Bishop Daly’s body at Saint Eugene’s Cathedral, Derry on Monday evening followed by evening prayer. His funeral will take place on Thursday.

A photograph of Dr Daly waving a blood soaked handkerchief at soldiers on Bloody Sunday is one of the defining images of the conflict in the North.

Paratroopers had opened fire and killed 13 people. Fourteen were injured, and another was to die later.

He was born in Belleek, Co Fermanagh in 1933. He went to secondary school in Derry before preparing for priesthood in the Pontifical Irish College, Rome.

Paying tribute to Dr Daly, President Michael D Higgins said he was saddened to hear of his death.

In a statement President Higgins said, “Edward Daly will be remembered by many for his peaceful, compassionate, humanitarian and courageous actions during the appalling events of Bloody Sunday.

“This was but one part of the great contribution that was his life of service to the citizens of Derry, including as it did his leadership in the tasks of regeneration and his work with the hospice movement in the later part of his life.

“His sense of compassion was delivered into the lives of the people he served with a practical and courageous commitment.”

‘Spent himself in the service of others’

In a statement, the Archbishop of Armagh Eamon Martin, who was ordained a priest by Dr Daly in 1987, said he had huge admiration for the bishop, who “literally spent himself in the service of others”.

“My first memory of Bishop Edward is when I was a thirteen year old boy, walking to the bottom of our street in Pennyburn, to greet the new bishop. He was just forty years of age and came across as warm, youthful and interested in us, his people.

“I shall always be grateful for his pastoral guidance, kindness and support.

“Bishop Edward was an iconic figure in the civic and church life of Ireland, North and South. He truly lived and proclaimed the good news of Jesus Christ and, in doing so, became a role model for all of us.”

Dr Martin said that Dr Daly would be remembered as a fearless peace-builder, exemplified by his courage on Bloody Sunday in Derry, and as a “holy and humble faith leader.”

“His personal friendship with Bishop James Mehaffey sent a quiet, yet powerful message of harmony and bridge building across the community divide,” he said.

Speaking on RTÉ’s Today with Seán O’Rourke show, Archbishop of Dublin Diarmuid Martin described Dr Daly “as one of the most distinguished and best loved bishops in Ireland,” who had a remarkable sense of integrity.

“Edward Daly’s position of integrity gave him a freedom to express his opinion on many things.

“During the Widgery Enquiry, all those years when they were basically calling him a liar. He didn’t respond. He never changed his version or his anger over how it was covered up.

“He was a very popular bishop. I was at his ordination as I have family in the area, on Inishowen. He was an extremely warm person, a joy to be with. There was a deep spirituality deeply embedded in the man.”

In a statement, the current Bishop of Derry Donal McKeown said Dr Daly “served, without any concern for himself, throughout the traumatic years of the Troubles, finding his ministry shaped by the experience of witnessing violence and its effects; through this dreadful period he always strove to preach the Gospel of the peace of Christ.”

He “provided an example of priestly ministry which was exemplary, inspired by service of God and the people he encountered. His ministry was characterised by his deep love of the people of this diocese, his dedicated visitation of parishes and his constant availability to others,” he said.

Minister for Foreign Affairs Charlie Flanagan said that “As well as being a man of God, Bishop Daly was first and foremost a man of peace. He was a key advocate for peace in Northern Ireland over a period of decades. As a pastor in Derry, he strove to heal a divided city.”

Former president Mary McAleese said his death “provokes both grief and gratitude. Grief at the loss of a man who epitomised all that us best in humanity and in priesthood. Gratitude for this man who was the perfect pastor. His strength lay in his innate decency, courage and honesty.

“The iconic picture of his waving a white handkerchief on Bloody Sunday told the true story of those dreadful events decades before they were officially acknowledged. His haunting and searingly honest description of the misery of life as a boarder in St Columbs told of a childhood sadness that stayed with him. It fuelled a natural empathy with a forms of suffering.

“His quiet work in the Derry Hospice meant more than will ever be known to patients and their families. His love for the vulnerable especially those coping with disability is legendary. In a divided community his strong commitment to ecumenism helped all of us transcend the gravitational pull of history’s hatreds and find our common humanity.

I never knew him to be anything other than heartfelt, warm and welcoming. He was a man I loved to meet for he affirmed everyone he met, delighted in life and as Gumilyov says in Gondla he exemplified the Irish capacity for a mercy capable of forgiving Judas himself.”

Eamonn McCann, MLA for Foyle spoke of the impact of Dr Daly’s interviews with journalists on Bloody Sunday.

“He was so emphatic, so distressed when he told reporters that the young man did not have a gun, was unarmed. That had a huge influence on what people believed about Bloody Sunday,” Mr McCann told RTÉ Radio One.