Opinion: At a time when anger and hostility to the church are prevalent, we could do with more priests like this 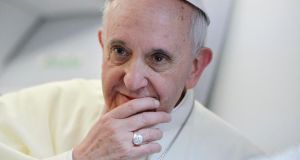 On October 30th, 1913, in the French village of Montauban-de- Bretagne, Joseph Lemarchand was born, the only child of a tenant-farming family that was ripped asunder by the death of his father in the Great War.

A few decades later, as a writer-priest stationed in the Breton capital, Rennes, Lemarchand took the pseudonym Jean Sulivan, a name inspired by his fascination with the movie Sullivan’s Travels .

When reading Pope Francis’ groundbreaking interview last August, I had the uncanny feeling that the new pontiff’s views strongly echo what Sulivan was writing in the 1960s and 1970s. A commitment to the poor and the marginalised; an unwillingness to pass moral judgments; a dislike of legalism and decrees from on high; and a distrust of monolithic institutions form the essence of Sulivan’s writings.

One comment in particular by Pope Francis would have resonated with the French writer: “[T]he church’s pastoral ministry cannot be obsessed with the transmission of a disjointed multitude of doctrines to be imposed insistently.”


Mere caricature
Sulivan was dubious about authoritarianism and believed that the institutional church was in danger of becoming a mere caricature of what its founder had intended.We read in his spiritual journal, Morning Light : “It is impossible not to grasp the contradiction between the speech of Jesus and ecclesiastical phraseology, mitres, capes, the whole show.”

As a priest who was also a writer, Sulivan urged readers to seek their own answers to the dilemmas of life. He had a preference for those who were wounded by life, as well as for rebels and misfits. He wrote: “Why am I so fascinated with those people who suddenly step out of line, when the crack appears that liberates them and turns them into outsiders? That is my nature: part of me identifies strongly with the outsider.”

Being an “outsider” can be uncomfortable, especially when one has dedicated one’s life to a church generally intolerant towards those who stray from the “clerical club”, an ordeal several Irish priests are undergoing currently.


Writing was the outlet through which Sulivan expressed his

Christian witness was a quality Sulivan valued highly and it can be seen to good effect in the 1966 novel, Eternity My Beloved, which relates the story of an unconventional priest, Strozzi, based on a real-life figure who came to Pigalle during the German Occupation and worked there until his death.

The prostitutes in this area of Paris become Strozzi’s special mission. The testimonies given by the prostitutes to the narrator – a thinly disguised version of Sulivan himself – demonstrate the extent to which he has transformed their lives. One of them, Elizabeth, says: “You’d like to pour out on others the love he has given you.”

How the church in the West could do with more priests such as Strozzi – figures like him and Peter McVerry are rare – at a time when anger and antagonism towards organised religion are endemic.

Thirty-three years on from his death in a hit-and-run incident in 1980, Sulivan’s voice retains a freshness and power that are the hallmarks of a true prophet.

One last quote from Morning Light underlines his relevance today: “Let the church have faith in God, Jesus Christ. Let it become transparent. That’s enough. Let it live by that faith. The news will get around.” Indeed it will!


Eamon Maher is director of the National Centre for Franco- Irish Studies at IT Tallaght. His latest book, co-edited with Eugene O’Brien, From Prosperity to Austerity: A socio-cultural Critique of the Celtic Tiger and its Aftermath , will be published shortly by Manchester University Press.