Archbishop declines to tell Catholics how to vote in referendum 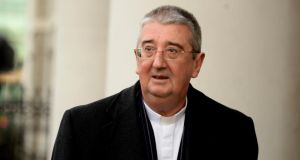 Archbishop Diarmuid Martin: a spokeswoman said it was not his policy “to tell others how to vote”. Photograph: Cyril Byrne/The Irish Times

Catholic Archbishop Diarmuid Martin of Dublin has declined to comment on the position of those Catholics who may vote Yes in Friday’s same-sex marriage referendum. It was not his policy “to tell others how to vote”, a spokeswoman said, while he stressed “that people should be informed”.

Responding to a query from The Irish Times as to the position of Catholics who may in conscience vote Yes on Friday, she said: “Archbishop Martin has publicly stated how he intends to vote and why.

“It is not his policy, however, to tell others how to vote except to stress that, given the importance of marriage and the family, decisions should not be taken lightly and that people should be informed of what is involved.”

“The occasion for the ‘confusion’ was a lengthy address I gave to the Iona Institute, the content of which neither the editor of the Irish Catholic or that of the Catholic Voice considered worthy of reporting.”

He was referring to an Iona Institute address he gave on March 19th where he set out “what my concerns about the referendum were based on”.

Writing in The Irish Times yesterday, the archbishop said that as a bishop he had strong views on marriage “based on my religious convictions. I have, however, no wish to stuff my religious views down other people’s throats.”

He said he had “no affiliation with any group of No campaigners . . . I have said that I intend to vote No, yet there are those of the ecclesiastical right wing who accuse me of being in favour of a Yes vote, since I do not engage in direct condemnation of gay and lesbian men and women.”