When Victor Griffin, a former dean of St Patrick’s Cathedral, was in Derry he annoyed Protestants. In Dublin he upset Catholics. Now 89, he reflects on a changed Ireland, and on Charles Haughey’s good deeds 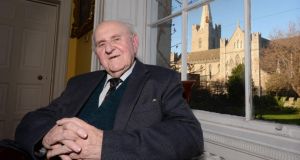 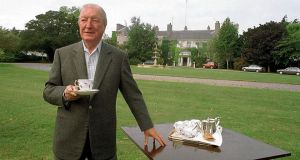 Dean Victor Griffin grows old in body but not in spirit. It becomes a man whom many see as the great dean of the 20th century. He had been at St Patrick’s Cathedral in Dublin for 22 years, from 1969 until 1991, when he and his wife, Daphne, left for Limavady, in Co Derry. Daphne, who had been a teacher in Limavady, had multiple sclerosis and died in 1998. He dedicated his 1993 autobiography, Mark of Protest, to her. In the book he recalls meeting her for the first time in Derry: “Any young man would have cast his eyes hungrily in her direction, and I was instantly ensnared.” He is a passionate man.

Passion was not a word much associated with Church of Ireland clergy when he arrived at St Patrick’s in 1969. At that time, to be Protestant in the Republic was, as with Patrick Kavanagh’s swan, a case of carrying one’s “head low with many apologies”.

When Griffin was growing up, on a farm at Carnew, on the border between Cos Wexford and Wicklow, his mother used to say, “Keep off religion and politics, Victor, or you’ll get us all burned out.” It was the Ireland of the 1920s and 1930s, and the family feared they would be associated “with the Protestant ascendancy, with the Unionists, so you had to keep quiet”.

The Catholic Church’s Ne Temere decree meant that a couple in a mixed marriage had undertake in writing to raise all their children Catholic. “It did a great deal of harm. Protestants said, ‘We have to keep together; we’ll be lost completely. This is extermination.’ So that drove the Protestants into a shell.”

Such a habitation would never contain Griffin. He took full advantage of his role as dean of St Patrick’s, the national cathedral of the Church of Ireland. Elected by fellow members of the cathedral chapter, who represented every diocese on the island, he was answerable to no one.“It really suited me.”

In Derry he had became involved with John Hume and others “fighting for a more tolerant and pluralist society. Northern Ireland at that time had the Protestant ascendancy.” He opposed it. “People thought I was very anti-Protestant, and I used to be called a Lundy and be told take myself back to my Fenian brethren in the South.”

After only a short time in the South he upset Catholics. “I opposed the Catholic ascendancy, and I was taken to task by a person called Oliver Flanagan in Dáil Éireann. He called me ‘another Paisley’ and said I should take myself back to my Orange brethren in the North.”

“I was completely misunderstood. What I was getting at was the importance of pluralism in Ireland, but nobody seemed to understand pluralism. This was 1969 and 1970, when ‘pluralism’ was a foreign word in Ireland. Then I talked to Garret FitzGerald about it, and he understood it. This eventually led to FitzGerald’s crusade.”

He was “on many platforms at that time, accompanied by, among others, Michael D Higgins, fighting for pluralism.”

Platforms became his home. He was involved with the anti-apartheid movement and protested at Lansdowne Road against a visiting Springboks rugby team. He helped to organise the peace train to Northern Ireland, and the Dublin Crisis Conference when Dublin Corporation – now Dublin City Council – planned “to resettle the Liberties with large highways, with large office blocks and large car parks: the unholy trinity. ”

Griffin and the Irish Times Environment Editor, Frank McDonald, produced a report “on what’s wrong with Dublin and what could be done to make it right. I was chairman of the Dublin Crisis Conference. And there was the question of the road widening here at the cathedral, where Charlie Haughey came to my rescue.”

Abortion
In 1983 he took an active part in trying to prevent the clause banning abortion in all circumstances being inserted into the Constitution. “I said it was ambiguous. I said it would end in tears, as indeed it did.”

In the 1986 divorce referendum there were people such as the former Supreme Court judge Catherine McGuinness “on the platform with me and Higgins. We were misunderstood. You were more or less branded as pro-abortion or pro-divorce.”

He “always made the point that that the Constitution should avoid morally controversial subjects as far as possible. They should be left to the legislature.”

His fellow Protestant clergy in Dublin went unseen. “They were very localised, very parochial. The limit of their vision was the parish boundary.” He believes the current archbishop, Michael Jackson, was addressing remnants of that locked-in- syndrome mentality at the Dublin and Glendalough synod in October.

But times have changed in the Republic, as elsewhere. Now Protestants in the Republic are “becoming much more involved outside the parishes. This global age has widened out their vision.”

When Griffin came to Dublin at the end of the 1960s John Charles McQuaid, the Catholic archbishop, banned Catholics from attending Trinity College. He and Griffin never met, though both held high office in the city for two years, until McQuaid retired, in 1971.

He recalls the way that McQuaid’s successor, Dermot Ryan, refused to sit in the sanctuary with other clergy at the eucharist in St Patrick’s that marked the inauguration of Erskine Childers as president, in 1973.“He sat in the nave.”

It was in the 1970s, too, that the IRA threatened to blow up St Patrick’s because of the Remembrance Day services there each November. The windows of his residence, the deanery, were smashed, and “Brits Out” was daubed on the walls. He and the deanery were placed under Garda protection. His twin sons, Kevin and Timothy, became gardaí. The change in attitude to the Remembrance Day service has been “fantastic, absolutely fantastic”.

One of the tragedies of Ireland is “the lack of integrated education”. He saw no reason “why integration should do away with the churches’ influence. The churches should take the lead in these things. It would improve the situation in all Ireland tremendously.”

The situation in Northern Ireland is “so much better than it used to be. The executive is talking but not delivering things. I suppose, if that keeps the peace . . .”

There is now “a more plural society, both north and south, today. The great thing is that the majority of people north and south want no more to do with violence.”

He is sanguine about the future of religion in Ireland. “The spirit of God can blow anywhere and can inspire and infuse anybody. You think sometimes, with the institutional church, that God is in our hands: if we do this we’ll break the kingdom of heaven. You’d almost think that God will vanish if we make a mistake.”

He speaks fondly of the late former taoiseach Charles Haughey. “Charlie, dear Charlie. My dealings with him were always pleasant. Charlie did one or two good things for me. He solved the road-widening problem for me and helped me with the schools. He had a good sense of history and what was important to preserve, in the way of music and the arts. So much so that when I approached him about the future of the choir school, which is going since 1432, he arranged for us to get help from the Department of Education.”

Haughey “helped solve the dispute between me and Dublin Corporation, which involved defence of the Liberties and the question of the widening of the roadway in front of St Patrick’s, which would have affected, I believe, the foundations of the cathedral.”

Part of the 1986 Channel 4 documentary Charlie Haughey’s Ireland was filmed at the deanery. “I appeared in his film and took a certain amount of stick for that.” As a quid pro quo he was invited to Haughey’s home in Kinsealy the following day.

“Charlie had this wonderful model of the cathedral and everything on the floor. All the corporation officials were saying, ‘If you narrowed the roads outside St Patrick’s you’d cause traffic jams in Harold’s Cross, a lot of confusion, the whole plan would go.’

“So I said, ‘There’s no point in discussing this at all. We’ll just have to continue the protests with loudhailers in the Liberties on the back of a truck.’ Charlie said, ‘I’m not going to fall out with my good friend the dean.’ So he leaned down and pushed out the model and said, ‘What’s that distance there?’ And they measured it. ‘About 45ft [14m]. What about that?’

“I said, ‘It’s far better than having it against the railings.’ The corporation people said, ‘You can’t do that: you’ll destroy the whole thing.’ Charlie said, ‘The discussion is closed . . . You’re going to have 45ft outside the cathedral.’ ” Now he calls the space on Clanbrassil Street, outside St Patrick’s, Charlie Haughey’s plaza.

It is 22 years since he retired. He is 89 and “so fortunate”, despite bouts of bowel and skin cancer. The NHS in Northern Ireland is wonderful, he says; his family includes five grandchildren; and “Derry people are the nicest in the world.”

Sustained by faith and an Ireland more in accord with his generous convictions, Victor Griffin is a content man.