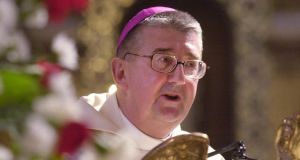 Archbishop of Dublin Diarmuid Martin said today where uncovering clerical child abuse was concerned ‘some inbuilt prejudices had to be overcome’.

Archbishop of Dublin Diarmuid Martin has said a dozen clerical child abusers were active in the Dublin archdiocese” in the 1970s.

He also described the Catholic Church’s handling of clerical child sex abuse in the past as “inexcusable”.

Archbishop Martin was speaking in the context of the UN Committee For the Rights Of The Child report last week which criticised the Vatican’s handling of clerical child sex abuse.

He said today that “12 serial (clerical) paedophiles were active” in the Dublin archdiocese” in the 1970s and described this as a “big tragedy”.

He said he had removed two priests from ministry due to abuse which took place during his period as Archbishop (since April 2004).

Where uncovering clerical child abuse was concerned “some inbuilt prejudices had to be overcome” and it would “take time to spread elsewhere,” the Archbishop said.

While there had been “enormous progress in some countries” it was the case that in Africa there was “not such progress.”

“Immense progress had been made in Ireland, ” he said, where it was now mandatory to report all allegations of abuse by priests to the civil authorities and where church investigations did not take place until those civil investigations were complete.

He attributed much of that progress by the Church in Ireland to the work of the National Board for Safeguarding Children (NBSC), the church’s child protection watchdog.

He joked that he had recently suggested renting the NBSC to the HSE to assist it in applying child protection norms.

He also recalled seeing a letter from the Department of Education to a priest asking that a teacher, who had served a sentence for child abuse, be allowed a teaching job as he needed another year and a half for pension purposes.

Archbishop Martin was speaking on the RTE Radio One This Week programme today.

He said the same sex marriage debate in Ireland had got off to “a bad start”.

Defending church teaching that marriage should be between heterosexuals only, he said “the church cannot impose (its teaching)” but it had a right to its’ say. There was, he said “something special about the relationship between a man and a woman” and that marriage was “only about heterosexual union.”

He agreed with Rory O’Neill (Miss Panti) that there was a ‘homophobe’ in all of us and recalled jokes about gays and travellers growing up. “We have to grow out of it,” he said.

He also said that in general it was “the person offended who defines the word” (causing the offence). “People in the church can be (homophobic),” he said and that “church teaching can be used in a homophobic way” but “all will have to cleanse” it of that.

He described as “too slow” the pace with which primary schools were being divested of Catholic patronage.

Part of the reason for this was resistance by local TDs, including Labour Party TDs he claimed.

Archbishop Martin said he felt that it could take up to a decade before the Church in Dublin divested itself of half of the schools of which he is currently patron.