Refugees and migrants to be housed outside Dublin 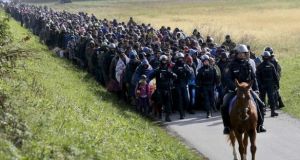 Minister of State at the Department of Justice Aodhán Ó Ríordáin last month said the homeless and housing crisis in Dublin meant refugees should be accommodated elsewhere in the country. Photograph: Reuters

Refugees coming to Ireland as part of the response to the European migrant crisis are expected to be put in long-term accommodation outside Dublin.

Those who move on from the orientation centres which will initially house incoming migrants will be settled outside the capital, a Government source said.

Ireland will take in 4,000 refugees over the next two years as part of the European response to the crisis.

As part of the Irish effort, the Department of Justice is to establish a network of emergency reception and orientation centres, which will be in place when refugees begin arriving to Ireland from migration “hotspots” in Italy and Greece. The centres will receive incoming refugees before they are sent to more permanent accommodation across the country.

Speaking ahead of a meeting on Wednesday of the Government task force on the Irish refugee protection programme, Minister for Justice Frances Fitzgerald said a group in Ireland on a resettlement programme will be accommodated in Cork and Kerry.

“For the first group of 100 that are already here on a resettlement programme, they are moving to Cork and Kerry but the accommodation we have been offered is all over the country,” Ms Fitzgerald said. “But its

suitability has to be assessed.”

A well-placed source said those who move on from orientation centres would be sent outside the capital, citing existing housing pressures in Dublin. It is also felt it would be easier for refugees to integrate in smaller communities around the country.

“Those who leave the orientation centres are expected to be housed in communities outside Dublin,” the source said.

Minister of State at the Department of Justice Aodhán Ó Ríordáin last month said the homeless and housing crisis in Dublin meant refugees should be accommodated elsewhere in the country. His position is now set to be reflected by Ms Fitzgerald, who said she expected 80 per cent of those arriving to be granted refugee status.

“This programme is for refugees who are in Italy and Greece and we will be sending liaison officers in the next few weeks to identify family groups, probably of Syrians. We will probably have between 20 and 30 arriving before the end of the year,” she said, adding that suitable accommodation has been identified.

“They will be assessed very quickly, we believe [in] between eight and 12 weeks. Their refugee status will be decided upon very quickly. In the first instance we have been asked to provide accommodation that would keep the family groups together,” she said.