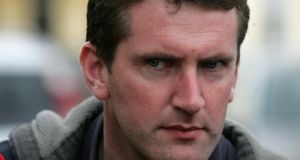 Aodhán Ó Riordáin: “It is unacceptable that a child could spend half their life in a direct provision centre – in poverty, marginalised, stigmatised.” Photograph: Frank Miller/The Irish Times

Aodhán Ó Riordáin, in an interview with The Irish Times, said direct provision was identified as a “major concern” by Tánaiste Joan Burton when she appointed him last week. He is also the new Minister of State for Equality and New Communities.

“Direct provision needs radical reform. It is unacceptable that a child could spend half their life in a direct provision centre – in poverty, marginalised, stigmatised.

“I will be working closely with the Minister [for Justice, Frances Fitzgerald] and officials on this. A lot of work has in fact already been done, and there is an awareness within the department it has to change.

“I plan to visit a number of centres in the next few weeks and to have proposals on short-term solutions in September or early October.”

The system has been criticised for the isolation, boredom, lack of control over meals and lack of privacy.

Mr Ó Riordáin is “open to suggestions” on reforms, but emphasises the immediate need to shorten the time people spend in the system.

Responding to arguments that the system provides for basic needs without creating a “pull” to economic migrants, he says “it has to be a system that works for society but also treats people with respect”.

A second priority will be passing a referendum on same-sex marriage next year.

“It could be lost. It’s going to be one hell of a battle to win it. There’s complacency it will be won, and I don’t think that’s necessarily the case.

“The argument against it will be that it will change too much, but the argument for it has to be that it won’t change anything, that these families are here and functioning but the children at the centre of them have no constitutional protection.”

He would like to deliver Traveller ethnicity, seeing it as “an important statement of affirmative support for Travellers”.

Politically, however, “hearts and minds still have to be won on it”, he says, despite a report from the Oireachtas Committee on Justice in April that Traveller ethnicity be recognised.

“It wouldn’t be enough to just name Travellers as an ethnic minority. There has to also be appropriate education supports. Housing needs have to be met.

He said he owes his passionate belief in a fair society both to his Catholic upbringing and to his time teaching in St Laurence O’Toole national school in Dublin’s Sheriff Street.

“This country has been ruled by people like me – male, white, middle-class, Catholic, heterosexual, able-bodied, settled.

“When I started teaching I saw kids who were brighter than me, more capable, but who would be prevented from achieving all they could only because society told them they weren’t good enough.

“When the rest of society tells you you’re not allowed from the age of six or seven, that seeps into the bones, that debilitates for the rest of your life.

Concern over rise in Covid-19 cases in Louth, Donegal and Waterford 09:38
Man in his 40s dies after two-car crash on N7 in Dublin 09:24
Gardaí break up rave attended by 60 people at Dublin flat complex 08:51
Dublin restaurateurs praise ‘amazing’ support from customers 06:55
Cork City FC leads tributes to man who drowned near Youghal 06:39