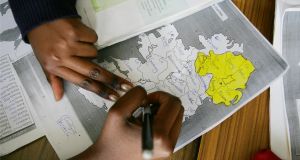 The Northern Ireland Council for Ethnic Minorities has published a series of proposals and is pressing Stormont ministers to “maximise the realisation of rights for ethnic minorities”. Photograph: Bryan O’Brien/The Irish Times

An independent body which monitors racism and racial inequality is pushing the British government to devolve immigration and asylum powers to the Stormont Executive.

The Northern Ireland Council for Ethnic Minorities (Nicem), an umbrella organisation for 29 black and ethnic groups, has published a series of proposals and is pressing Stormont ministers to “maximise the realisation of rights for ethnic minorities”.

In addition to the transfer of asylum and related powers to Belfast from London, the organisation wants Peter Robinson’s and Martin McGuinness’s office to introduce a “robust and comprehensive Racial Equality Strategy” with implementation plans for the 10 Stormont departments.

The recommendations are made following a spate of race-related incidents including a controversial sermon against Islam by a Belfast pastor and public backing for him by Mr Robinson. Both have since apologised.

Nicem is also calling for the Executive to strengthen racial equality legislation in Northern Ireland and to bring it into line with UK and international standards.

It also wants a “robust and inclusive” Bill of Rights for Northern Ireland to promote compliance with British, EU and international recommendations. Efforts to agree a Bill were begun in the early 2000s but were stalled in the face of unionist opposition.

Patrick Yu, Nicem’s executive director said: “The launch of this report is very timely given the recent spate of high profile racist attacks, the report highlights deficiencies and underlying gaps in the protection of ethnic minorities in Northern Ireland across all the key policy areas.”

He warned: “Such deficiencies must be rectified if we are to tackle the underlying inequalities and prejudices that causes hate crime in Northern Ireland.”

“This report will be our contribution towards the forthcoming Racial Equality Strategy, it maps all the current racial inequalities in Northern Ireland that breach international human rights standards,” he added.

Presenting the report to Jonathan Bell and Jennifer McCann, junior ministers in the Office of First Minister and Deputy First Minister, Mr Yu said: “We do hope that the two junior ministers will incorporate it in to a robust strategy with adequate resources, high level strategic targets and a detailed action plan.”