Q&A: What is the Citizens’ Assembly?

Answers to some of the key questions on the assembly 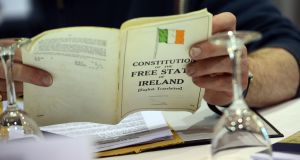 What is the Citizens’ Assembly?

It is a body of 99 citizens, chosen to be broadly representative of the State’s population, which will meet to discuss a limited number of key issues in the Constitution. It will make a report to the Houses of the Oireachtas on each of those issues.

The Programme for a Partnership Government committed the Government to the establishment of such an assembly within six months and without participation by politicians.

Its first task will be to examine the Eighth Amendment to the Constitution (Article 40.3.3), which gives effect to the ban on abortion.

How long will it take?

The assembly will discuss the future of the constitutional ban on abortion in several sessions over the coming months, probably seeking submissions and input from interested groups and relevant experts.

It will then make its conclusions in a report to the Oireachtas. The expectation in Government is that this report will be delivered in the first half of next year.

The report will first go to an Oireachtas committee which may hold hearings before making its recommendations to the Government. Any proposal to either repeal or replace article 40.3.3 would have to be passed by the Dáil, and ultimately put to the people in a referendum.

It it just discussing the abortion issue?

No, the assembly will also be tasked with examining other issues, including how best to respond to the challenges and opportunities of an ageing population; fixed-term parliaments; the manner in which referendums are held and how the State can make Ireland a leader in tackling climate change.

It will also be asked to consider such other matters as may be referred to it.

It will first make a report and recommendation on the Eighth Amendment issue. This is expected by about next June. The assembly will then complete consideration of the remaining items and will report within one year from the date of its first meeting.

Who is taking part in it?

The assembly comprises the chairperson plus 99 citizens randomly selected on the basis of being representative of the Irish electorate in terms of gender, age and regional spread.

An amendment was made to the Electoral Act 1992 to permit the electoral register to be used in the selection of the citizen members. RED C Research and Marketing Ltd was appointed on August 22nd last to provide the representative sample of 99 members of the public and substitutes.

Who is chairing it?

Are there any politicians involved?

No. Unlike the previous Constitutional Convention, which recommended a referendum on marriage equality which was eventually passed, there will be no politicians involved. The assembly will, however, take submissions and it will consult a variety of experts on the various issues under consideration.

Where is it meeting?

The inaugural meeting of the assembly will take place in Dublin Castle on Saturday, October 15th. Thereafter, its meetings will take place at the Grand Hotel in Malahide, which was selected following a competitive tendering process.

What will happen on Saturday at the first meeting?

Taoiseach Enda Kenny will address the assembly at St Patrick’s Hall in Dublin Castle at 2pm and it will then go into private session until about 5pm.

It is an introductory session, affording members the opportunity to meet one another and to gain a better understanding of the role which they will play.

They will also consider the key principles which will underpin the work of the assembly, and the rules and procedures that will govern it.

Can I watch the proceedings?

Yes. The public part of the inaugural meeting will be livesteamed at citizensassembly.ie