Protestant or Catholic, the short lives of these children must be given some respect

Opinion: If you are small and powerless, even the most basic respect of having a marked grave may be denied you 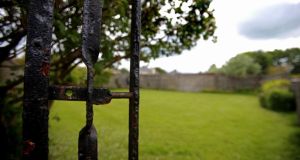 ‘The point of investigating the past is not just avoiding the mistakes that were made then, because times have changed so utterly that we are very unlikely to bury poor children in unmarked graves.’ Above, the site of a mass grave for children who died in the Tuam mother and baby home, Galway. Photograph: Niall Carson/PA Wire

In the film Calvary, there is a scene where two airport workers are waiting to load a coffin onto an aircraft. They are having a chat and one of them is leaning his elbows on the coffin, as if it were any old piece of freight.

A young French woman, who is in the appalling situation of having to transport her husband home in a coffin after a car crash, witnesses this as she waits to board the aircraft along with Fr James Lavelle, the central character in Calvary (played brilliantly by Brendan Gleeson.)

Without wishing to give away the plot, the casual disrespect and the disregard for the grief of the bereaved shown by the workers triggers an important turning point in the film.

We Irish pride ourselves on doing death well, on having healthy rituals that help both to make sense of grief and to build a sense of community.

It seems that it all depends on who you are. Yet again, we see that if you are small and powerless, even the most basic respect of having a marked grave may be denied you.

We have witnessed this already in the long struggle of the survivors of the Bethany Home for recognition.

I am sure that our Protestant neighbours might well conclude that sectarianism is alive and well, because there was nothing like the same outcry when the revelations about the extraordinary rate of death of babies and children in the Bethany Homes emerged. Do Protestant children count for less?

Protestant or Catholic, the short lives of these children must be given some respect, even at this late stage. We must know how this happened, that the bodies of babies and toddlers appear to have ended up in a disused septic tank.

It is hard to imagine the grief and torment that mothers who passed through these homes must be experiencing. Many of them would never have known the fate of their babies. Many of them perhaps imagined their babies in safety with futures better than they themselves experienced.

Their mothers were just expected to forget about them, to continue on as if they never carried them under their hearts for nine months. It should go without saying that anyone who knows anything about this tragedy should immediately reveal any information that they have.

There are other unmarked graves around the country and they should be investigated, too, to see if, even at this late stage, some reparation can be made for the way Irish society ostracised and neglected single mothers and their babies.

Not everybody was callous or indifferent. I had the privilege of interviewing Dr James Deeny before his death. He was someone who not only had a large hand in the eradication of TB, but who was also capable of closing down a home when he was chief medical officer, because the children were so malnourished and neglected.

He fired the manager even though she was a nun. It was possible to stand up to powerful institutions, but it took courage to do so.

The locals, too, who were aware that there was a mass grave in the vicinity of the Tuam mother and babies home, tended the grass and erected a grotto. They have managed to respond with more humanity than government ministers who were aware of reports about this scandal for quite some time.

It is true that Ireland was a poorer place all those decades ago, with very high rates of infant mortality, perhaps even 20 times higher than today, as Minister of State at the Department of Health, Kathleen Lynch pointed out in a speech in the Dáil about the Bethany Homes.

It is true too that Ireland was plagued with TB and other infectious diseases that are much more easily treated today. Were we so poor, though, that we denied children the right to respect in death, the right to an identity? So poor that we also failed to be true to the Christian ideal that no child is unwanted in the eyes of God?

The point of investigating the past is not just avoiding the mistakes that were made then, because times have changed so utterly that we are very unlikely to bury poor children in unmarked graves.

However, every era has different areas of blindness. What is it that not enough people are questioning today?

In an era of austerity, are we so poor that exhausted families of children with life-limiting illnesses have to battle for State help?

There must be a comprehensive investigation and a fitting memorial, but there also must be reflection on whom we are failing in 2014.