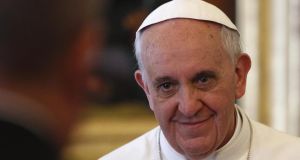 The very process of gathering information on the views of people was in the spirit of Pope Francis, said Martin Long, spokesman for the Irish Catholic Bishops’ Conference. Photograph: AP Photo/Tony Gentile

The Association of Catholic Priests (ACP) has criticised a decision by Irish Bishops not to release the results of a Vatican-sponsored questionnaire on a range of controversial issues.

The survey was conducted in parishes throughout the country ahead of the Extraordinary Synod on the family in Rome next October.

A worldwide process, it addresses a range of subjects including homosexuality, premarital sex and the question of Holy Communion for the divorced and remarried.

The ACP said the decision not to make the findings public was contrary to Pope Francis’s openness and came “at a time when the church in Ireland is regarded with suspicion. This decision of the bishops will only serve to make many people question if they have really reported the views of the people,” it said. “It will also create the suspicion that the results of the survey may be adapted to make them more palatable to traditional views in the Vatican. And it will arouse needless speculation about their content.

“This secretive approach confirms once again the need for the Irish Catholic Church – at all levels – to learn the value of transparency.”

However, the official church position is that the survey is a matter for the Synod and is designed to help inform the two-week conference, rather than being for public consumption.

Martin Long, spokesman for the Irish Catholic Bishops’ Conference, said the very process of gathering information on the views of people was in the spirit of Pope Francis.

“All returns need to be considered together and to do otherwise would undermine the integrity of the process,” he said, referring to surveys being carried out in other states.

He could not comment on whether the views recorded would be made public after the Synod meets this year.

However, earlier this week the Irish Catholic reported that other bishops’ conferences had moved to publish results, naming Germany and Switzerland in particular. It said that those published to date displayed a divergence between church teachings on marriage, sexuality and family life, and beliefs of Catholics.

Mr Long said he could not comment on what was happening in other countries.