Power and privilege: how the wealthy, church and global capitalism hold sway

To glean an understanding of poverty, we have an obligation to analyse wealth 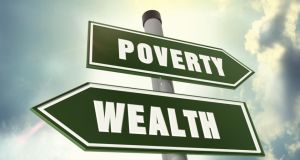 There is a strong correlation between wealth and power. Wealth allows individuals and groups to make donations to political parties, payments to lobbyists and grants to “experts” who can support their goals. Photograph: Getty Images

Billionaire Wilbur Ross invested €290 million in Bank of Ireland shares in 2011. He sold his shares this year, making a profit of €500 million. That is just how the system works.

In Dublin, entire families have to live in a hotel room and more and more people are forced to sleep on the street because they are too poor to be able to pay for accommodation. That is just how the system works. The same system.

There is something radically wrong with the system. No doubt some will call me naive. Maybe I am. But I suspect that most of those who call me naive enjoy a very comfortable income. I cannot expect someone to accept that the system is fundamentally unjust when their income and quality of life depend on maintaining that system. And that includes almost all the decision makers in Ireland and globally, both the economically developed and developing world.

To try to understand poverty, the poor have been analysed to death. Volumes have been written on their backgrounds, education and every minute detail of their lives.

Concentrated wealth But to understand poverty, we have to analyse wealth. It is difficult to analys

e wealth in Ireland, as little information is available. However, there is no reason to believe that Ireland is very different to other developed countries such as the US or Canada, where research findings are much more extensive. Research there shows wealth, over the past few decades, becoming increasingly concentrated among the already wealthy. For example: nIn US in the 1980s, 1990s and early 2000s, 94 per cent of the wealth created went to the top 20 per cent, while only 6 per cent went to bottom 80 per cent.

Most of the wealth being created today is sucked up into bank accounts of the already wealthy. The outrage expressed at the pay, bonuses, golden handshakes and pensions of bankers, corporate executives and senior civil servants suggests that Ireland is little different.

A 2010 study by Merill Lynch found that, excluding the value of housing, the top 1 per cent of the Irish population controlled 34 per cent of all wealth. A Sunday Times survey in 2013 found that the top 250 richest people in Ireland were worth €49.83 billion, up from €46.7 billion in 2012.

Many of the very wealthy try to hide their wealth by creating an intricate network of corporate structures across multiple jurisdictions, which can be extremely difficult to crack, as the National Asset Management Agency has discovered in its pursuit of debts.

Some use illegal methods to try to hide their money. The Ansbacher tax evasion scandal – which yielded €113 million from 141 individuals – lingers in the memory (without a single prosecution), while the Revenue’s 10-year investigation into offshore bank accounts has already recouped about €1 billion from 15,000 individuals, and continues to unearth new offshore accounts.

There is a strong correlation between wealth and power. Wealth allows people and groups to make donations to political parties, payments to lobbyists and grants to “experts” who can support their goals. We have seen this with the tobacco and alcohol industries, builders and developers during the Celtic Tiger years, and the oil companies’ expensive lobbying against action on climate change.

Those with considerable wealth also have the power to threaten to exit the country, as many in Ireland have already done. Some 10,781 people are now non-resident for tax purposes, up from 3,000 in 2005. The Government’s advisory Tax Strategy Group warned that any attempt to extract more money from them would lead many tax exiles to “sever their connections” with Ireland, with possible consequences for “investment and employment” here. The threat that they could sabotage the economy is always in the background.

Socialism imploded because it denied the dignity of the individual. Ethically, global capitalism is no different: the individual consumer or employee is simply a means to maximising profit for one sector of the economy.

Where such inequality of wealth and power exists, there can be no lasting peace or stability.

Peter McVerry is a Jesuit priest working with homeless people