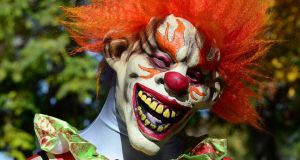 The prank, originating in America, involves people dressing up as clowns to try to intimidate or scare the public. Photograph: Helen H Richardson

A senior police officer in Northern Ireland has warned anyone thinking of taking part in the “killer clown” craze to consider the possible consequences of their actions.

The prank, originating in the US, involves people dressing up as clowns to try to intimidate or scare members of the public.

The PSNI has received several reports in connection to social media posts where individuals have suggested dressing in clown costumes and going to schools to scare students and teachers.

A police statement said the service was aware that posts of this nature have been placed on various social media platforms by people living in England and Dublin.

PSNI Assistant Chief Constable Stephen Martin advised anyone who may be considering posting information on social media platforms to “consider what they’re saying”.

“Encouraging behaviour that has the potential to generate fear or indeed posting threatening messages can lead to a criminal record,” he said. “Crime is crime, whether in the virtual world or the real world and there are consequences. Please don’t get caught up in something that could jeopardise your future.”