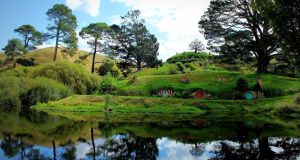 Hobbit holes in Hobbiton, Matamata, New Zealand. People in Kerry are being forced to live like “hobbits” according to Maura Healy-Rae. Photograph: Jackie.Icl/Flickr/Creative Commons

People in Kerry are being forced to live like “hobbits” and to build in “hollows” because the local authority has banned one-off houses on elevated sites, the latest generation of the Healy-Rae political clan has declared.

The tougher rules were brought in by the local authority last year in its 2015-21 development plan, following the property boom which saw sharp increases in the number of planning permissions being granted.

Speaking at a meeting in Killarney, Cllr Maura Healy-Rae, who took over the seat vacated by her father Danny when he won a Dáil seat, called on planners “to desist from forcing applicants to build in low ground or in hollows”.

Rejecting the complaint, council management said protecting the landscape was of “critical importance” to the county’s economy and the siting of a house was critical “when considering its visual impact”.

Kerry County Council executives told councillors that one-off houses should be built on sheltered sites and not break the skyline or block scenic views. Applications last year were up by a fifth on 2014 to 1,176. However, the numbers are below the boom years when, between 2002 and 2007, some 7,600 one-off houses were built in the countryside.