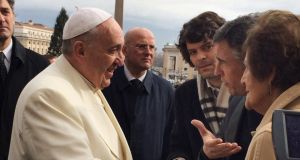 The woman whose determination to find a son given up for adoption in 1950s Ireland inspired the Oscar-nominated movie Philomena, now hopes the Pope will join in her struggle to help other mothers in similar circumstances.

Philomena Lee (80), along with Steve Coogan, the star, co-writer and producer of Philomena, and Ms Lee’s daughter Jane Libberton had an audience in the Vatican yesterday afternoon with Pope Francis.

Afterwards, Ms Lee said: “I hope and believe that his Holiness Pope Francis joins me in the fight to help the thousands of mothers and children who need closure on their own stories.”

They were in the Vatican on behalf of the Philomena Project, a campaign set up to lobby the Irish Government to open up adoption files to help reunite mothers separated from their children.

Anti-Catholic allegations
A Vatican spokesman was at pains to point out that Pope Francis does not watch films, but his presence is likely to put to bed allegations that surfaced in the US that Philomena is an anti-Catholic diatribe.

Ms Lee’s son Anthony was born in a mother and baby home in Roscrea, Co Tipperary, in 1952 and given up for adoption to the US three year later.

He grew up as Michael Hess and became senior counsel to the Reagan and Bush White House administrations.

In later years, both Hess and Ms Lee were simultaneously trying to find one another, but he died of Aids in 1995, before he could be reunited with his birth mother.

Depiction of nuns
The film Philomena portrays the nuns involved in the adoption, with the exception of one, as heartless liars, but it also shows her retaining her faith despite the grief inflicted on her.

Speaking after the meeting, Ms Lee said: “I am honoured and delighted to have been in the presence of Pope Francis today. As the film portrays, I have always put great faith in the church and the good will to put the wrongs of the past right”.

1 Trump threatens to ‘close down’ social media companies after Twitter fact-check
2 Binoculars at the ready: Elon Musk rocket to be seen in Irish skies tonight
3 Sil Fox tells of ‘months of hell’ as he is cleared of sex assault on woman in bar
4 Holohan tells ministers no immediate change to two-metre rule
5 Miriam Lord: Leo’s Phoenix pecs just a storm in a bag of cans
Real news has value SUBSCRIBE