Irish American billionaire’s conflict with board members ‘nearly killed him’ 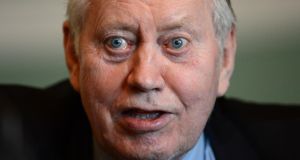 Chuck Feeney: Details of the conflict, which took an “almost intolerable” toll on his health, are contained in a new edition of his biography.

Billionaire philanthropist Chuck Feeney lost control of the board of his own charitable foundation during a bitter dispute over how to spend his remaining funds, it has been revealed.

Details of the conflict, which took an “almost intolerable” toll on Feeney’s health, are contained in a new edition of his biography.

“The conflict nearly killed him, and it would severely compromise his long and complex relationship with Harvey Dale, a founding president of Atlantic [Philanthropies],” writes Conor O’Clery in a new chapter to The Billionaire Who Wasn’t, a study of the publicity-shy Irish American businessman first published in 2007.

The dispute centred over a shift within the foundation’s management towards the grant-funding of social justice causes, including some closely associated with the Obama administration.

While the move was strongly supported by the board, Feeney feared the foundation “was losing sight of his vision and would jeopardise his ability to make large gifts for bricks-and-mortar projects”.

He was uneasy with the high profile that Atlantic and its leadership were gaining in the political and social justice arena and raised his concerns about this, and the rising costs involved, in a letter to the board in June 2009.

But, O’Clery writes, “Feeney was rebuffed. He could do nothing . He might be the moral leader and source of all the foundation’s assets, but he had only one vote on an independent board.”

In early 2010, Feeney asked Dale - a man he once described as “the most influential person in his life” - to seek the removal of three board members regarded as obstructionist.

“Dale tried to talk Feeney out of it... But Feeney was adamant. Dale bit the bullet and approached the three individually to convey Feeney’s request that they resign. They refused, as he expected. Feeney was furious. He told Dale, ‘You have failed’.”

The dispute created turmoil in the charity as Feeney’s “long and close relationship” with Dale “almost completely unravelled”. His health also suffered.

On a visit to Dublin in late 2010, he was hospitalised with a chest infection. On a subsequent trip, he was admitted to St James’s Hospital with a more serious illness. “His heart had stopped briefly, and he had a pacemaker inserted. Friends and family feared the crisis was destroying him.”

The dispute was resolved after the foundation’s chief executive Gara LaMarche resigned in May 2011. The following year Feeney announced that Atlantic Philanthropies was to complete grant-making by the end of 2016, and cease operations in 2020.

Mr Feeney (83), who made his fortune from duty free shops in the Far East, has donated more than €6 billion through the foundation since it was founded in 1982, including more than €1.5 billion to Irish educational and social causes.