Pastor sorry for calling Islam a ‘doctrine spawned in hell’

James McConnell, who had been backed by First Minister, questioned by PSNI for two hours 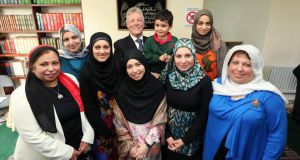 A photograph of First Minister Peter Robinson with members of the Muslim community during his visit to the Belfast Islamic Centre in Wellington Park, south Belfast earlier this week, where he made a public apology for any offence caused to Muslims by his defence of controversial pastor James McConnell. Photograph: Kelvin Boyes/Press Eye /PA Wire.

Pastor James McConnell has publicly apologised for his depiction of Islam as “satanic”, “heathen” and “a doctrine spawned in hell”.

He also said former Conservative minister and a one-time Ulster Unionist MP Enoch Powell was “a prophet” on issues related to immigration.

In a statement today, the pastor from Whitewell Metropolitan Tabernacle in north Belfast said he did not intend to offend anyone or create tension.

Mr McConnell has also been questioned by the PSNI about his remarks. He spent about two hours today at Newtownabbey police station before leaving with his solicitor. He was not arrested and went to the PSNI voluntarily.

In a statement placed on his church’s website, Pastor McConnell said: “I wish to make a clarification statement with regards to statements made by me recently in relation to members of the Muslim faith.

“I wish to apologise publicly for any distress I may have unwittingly caused on my part.”

He said he intended to visit Belfast’s Islamic Centre, a move already made by DUP leader and First Minister Peter Robinson, who had backed Pastor McConnell.

Mr Robinson has attended services at the pastor’s church.

Referring to his comments made on May 18th, he added: “My sermon was drawing attention to how many followers of Islam have, regrettably, interpreted the doctrine of Islam as justification for violence.

“I have qualified my comments by reference to those who use their religion as justification for violence. As a preacher of the word of God, it is this interpretation of the doctrine of Islam which I am condemning.”

The pastor said he abhorred violence and condemned anyone of any faith,who uses religion to justify it.

“I have devoted 60 years of my life to the service of God and preached the word of God as a pastor to thousands of people in our community over my lifetime,” he continued.

“I have worked tirelessly to promote my Christian doctrine. Many faiths and denominations have attended at the Whitewell Metropolitan Tabernacle, including members of the Muslim faith.

“My mission has created a community in Ethiopia which ensures over 600 children a day, including Christians and Muslims, have access to clean water and food. In addition, we fund a clinic in Kenya which provides 1,200 people a month with access to medical care.

“I believe in the principle of free speech and in freedom of religion.

“Finally, I also will welcome any opportunity to attend at the Islamic Centre in Belfast in the near future.”