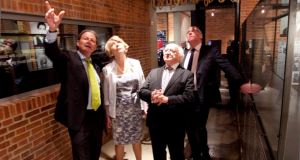 Amnesia is not an option when it comes to Ireland dealing with the past, nor is moral equivalence, President Michael D Higgins has said.

“Murder is murder,” he said when speaking to media after a visit to the Apartheid Museum in Johannesburg today at the beginning of a working visit to South Africa.

He was accompanied at the museum by his wife Sabina, Minister of State Tom Hayes, Irish Ambassador to South Africa Liam MacGabhann and museum director Christopher Till.

“What I have just witnessed had a huge, enormous component of state violence. It is the greatest part of it,” he said.

In such situations it had to be realised “that the existing state has to look back and make appropriate recognition of what was done in the name of the state.

“The loss of life, the injuries committed, the price that is paid at all times for different forms of repression and subjugation, these are actions that can’t be undone,” he said.

What had to be addressed was “their capacity to disable the future”, he said.

What was required was a “taking into account the account of the other” while “not conferring any moral equivalence on it. That’s very important”.

You try “to make the whole version of the event or period as complete as possible” but it ought to be agreed that those who are wounded would not be required “to indulge in any kind of amoral amnesia”.

“[However], the future is there to be imagined as a space and place and a set of possibilities beyond all of what is behind,” said the President.

It was “a very difficult struggle because very often those who wish to colonise the future . . . will use a distortion of memory to define the future”.

Earlier this week, at a dinner hosted by president of Malawi, Peter Mutharika, President Higgins said that one the most damaging aspects of colonialism was “the way it shatters our view of the past”.

“How to imagine a future released from the burdens of distorted past memories, and seemingly insurmountable present difficulties? ‘Imagine’ is the important term here.

“Indeed, while brutal and inhuman deeds cannot, for the most moral of reasons, be forgotten, it is only through an act of imagination and creativity that we can prevent the tragic memory from colonising the future.”

“Finding a fair and comprehensive way of dealing with the past, one that can win the confidence of all, is a huge challenge – but one we are doing our best to face up to with honesty, both ethical and historical.”