Over 15,000 people waiting for speech assessment 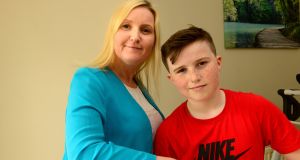 More than 15,000 were waiting for a speech and language therapy assessment at the end of last year, according to figures obtained by The Irish Times.

It represents a 20 per cent increase in the waiting list during 2015.

The data, released under the Freedom of Information Acts, also show the longest waits are in the poorer parts of Dublin and the commuter belt, with the shortest in sparsely populated rural areas and wealthier parts of Dublin.

The figures are broken down by community health area, month and length of time waiting, with the two years being the longest waiting time recorded.

Kildare-West Wicklow had the highest numbers at the end of last year with 1,829 waiting up to 18 months.

Also in the Dublin area, Dún Laoghaire has 153 people at the end of last year waiting up to eight months for an assessment.

In contrast there were 80 waiting up to four months in Sligo-Leitrim, 90 in Roscommon, 93 in West Cork, 113 in Dublin South East and 131 in Dún Laoghaire.

Nationally there were 3,021 waiting four to eight months; 1,166 eight to 12 months; 346 waiting 12 to 18 months and 90 were waiting between 18 months and two years for an initial speech and language assessment.

Broken down by area, some had no one waiting longer than four months by December 2015. These were Dublin South East, Roscommon, Sligo-Leitrim and Donegal.

In contrast, Kildare-West Wicklow had 499 people waiting between four and eight months, Dublin North had 493, Dublin North West had 318, and 247 in Wexford.

Kildare-West Wicklow again had the most people waiting for between eight and 12 months by December (531), followed by Dublin West (145), Dublin North West (129) and Dublin North (127).

Eleven areas had no one waiting this long, including Dún Laoghaire, Dublin South East, Wicklow, Wexford and Carlow-Kilkenny.

Kildare-West Wicklow had no one waiting 18 to 24 months for an assessment, This chart was topped by Dublin West, which had 27 in December. There were 19 waiting this long in Dublin North Central, and 18 in Dublin North West.

Seven other areas had between two and seven people waiting this long at the end of 2015, including Dublin South West (two), Galway (four) and North Cork (three).

Case study: ‘He first said he wanted to kill himself when he was seven’

Stephen Cullen’s (11) mother, Ruth, says the problems he has had with his speech and language, and with accessing therapy, have caused him “significant mental health difficulties”.

Stephen has had difficulty communicating since the age of four. There was real concern about him from age six. He did not get assessed for speech and language therapy until he was eight.

“He used to point at things rather than say them. He’d get very frustrated and had difficulty reading and writing, he couldn’t pronounce certain words and his vocabulary wasn’t what it should be,” she says.

Living in Celbridge, Co Kildare, he was finally assessed in 2012 and diagnosed with a specific language impairment. With nowhere suitable for his needs in Kildare, he was placed in a specialised speech and language class in Tallaght, Co Dublin, in September 2013.

“A taxi picked him up here each morning and dropped him back in the afternoon. It is ridiculous he could not get the therapy he needed in his own county, and he was taking a place that a Dublin child then couldn’t access.”

“The class was very small – just seven in the class. His teacher there was great. She brought his reading right up from junior infants level to second-class level.”

She removed him from the school, however, as he was very stressed with the commute and he is now back a local school. He was also getting HSE therapy in Kildare by then, but the therapist went on maternity leave last year, during which she was not replaced.Ruth has been paying for private therapy, at €80 a session, out of her domiciliary care allowance.

“The HSE therapist is just back. We have an appointment to go back to her, which is great. He’s very bright, but very shy and he knows he’s different. He suffers with depression. He first said he wanted to kill himself when he was seven. It’s very upsetting.”

Stephen is linked in with the Child and Adolescent Mental Health Service.

“I do believe the problems he has had with speech and language, and not getting the supports he needs, have affected his mental health,” says Ruth.

There are clinical impacts when necessary therapy is delayed, says Pauline Ackermann, chair of the Irish Association of Speech and Language Therapists (IASLT).

“When a child is unable to express their needs to their family, or when an adult has acquired a communication and swallowing difficulty after a stroke . . . delays [can] cause a great deal of anxiety and stress.

She welcomed the announcement in Budget 2016 “that funding would be ring- fenced to address long waiting lists”. “ It is IASLT’s understanding that the HSE has engaged with the Department of Health on proposals to alleviate pressure points,” she said.