Online petition to have US Navy destroyer named after Irishman

Naming would honour decorated Mayoman killed in 1967 at Da Nang 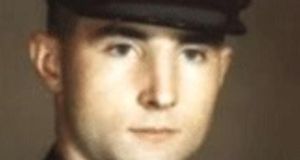 Marine Patrick (‘Bob) Gallagher from Ballyhaunis Co Mayo who won the Navy Cross for bravery, believed to be highest medal awarded an Irishman on US service in Vietnam, where he was killed in 1967

An online campaign is under way to have a US Navy destroyer named in 2017 after a young Mayoman who was killed in Vietnam in 1967. It would mark the 50th anniversary of his death.

Patrick (‘Bob’) Gallagher was from Derrintogher, near Ballyhaunis, Co Mayo and in 1962 he went to stay with his aunt in New York. He got a job in real estate and started at law school. He also campaigned for Senator Robert (Bobby) Kennedy there in 1964.

In February 1966 Patrick returned to Ballyhaunis for three weeks. He didn’t tell his family that he had been drafted into the US Marines. He went to Vietnam in April and on July 18th, 1966, saved the lives of three comrades, for which he was awarded the Navy Cross, the US navy’s highest honour.

News of this local hero caused great excitement in Ireland. In Ballyhaunis great plans were laid for his homecoming but on the day he was due home they buried him instead. On March 30th, 1967 he was shot dead while on patrol in Da Nang. He was 23.

Among those who wrote to the Gallagher family after Patrick’s death was Bobby Kennedy. He quoted Winston Churchill, who said “courage is rightly esteemed as the first of all human qualities because it is the one that guarantees all others”. This courage Corporal Gallagher gave to all of us. To him and to his family are due the thanks of a humbly grateful nation.” Within 14 months Bobby Kennedy himself would be dead, also from a gunshot.

Towards the end of last year a group of Irishmen had been discussing Patrick Gallagher at Marius Donnelly’s Trinity Hall pub in Dallas, Texas. In the company was pilot Martin Durkan from Ballyhaunis who supplied details of Patrick Gallagher’s story from an article in this newspaper.

It was decided to launch the online petition, which Marius Donnelly, originally from Malahide in Co Dublin, is sponsoring. Titled ‘Help Us Honor A Marine Corps Hero’, it is at www.patrickgallagherusmc.info.