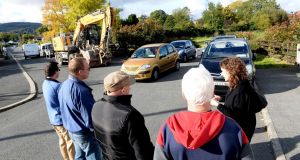 The scene at Rockville Drive off the Glanamuck Road where a digger was blocked from entering a site on Tuesday. Photograph: Cyril Byrne/The Irish Times

Housing officials from Dún Laoghaire-Rathdown County Council will on Wednesday meet residents of a Carrickmines estate who say they do not want a group of Travellers, who survived a fire at the weekend, housed near them.

Residents of Rockville Drive, a cul-de-sac off Glenamuck Road where 10 people lost their lives in a fire on Saturday morning, have mounted a blockade to stop diggers entering the council-owned site adjacent to their homes. They say they were not consulted by the council about their plans.

It is understood the council is now considering another site, though still plans to proceed with providing an emergency halting site at Rockville Drive.

A group of about six residents were gathered at the entrance to the one-acre field at lunchtime on Tuesday. They said the first they knew of the council’s plan to place 15 homeless Travellers on the site, was when diggers arrived at about 11am. A circular was then delivered to each of the 44 homes.

The circular, from the council’s director of housing and community Tom McHugh, said: “Following the tragic fire which took place on Saturday morning I am writing to advise you of the decision made by [the] council...to provide a temporary, emergency halting site on the..lands at the end of Rockville Drive.”

He said that “in view of the emergency nature of the housing needs of the families left homeless by the fire” the housing department was using emergency powers under the Housing Act to use the site.

He said a permanent site has also been identified and work on it, which is underway, would take eight months. The emergency site would accommodate four mobile homes and two service blocks with toilets and showers “together with boundary fencing”.

“In light of the particular circumstances I am asking for your understanding, assistance and co-operation,” said Mr McHugh.

Residents on Tuesday said that while “you’d have to be sad for them,” the surviving family members of those who died were “not wanted here”.

Minister for Equality Aodhan O Riordain tweeted: “This disgusting behaviour is not reflective of all settled people,” while Minister for the Environment, Alan Kelly, described the protest as “wrong”.

Only one of the residents, Mary Butler, would give her name. She said she had lived in the cul-de-sac for over 20 years.

“It’s just not a suitable site for Travellers. It’s too small and we’re already on top of each other here. No-one can object to people living somewhere. Everyone has a right to live somewhere but it’s just too close to our houses. It wouldn’t be safe for them either. Their kids would be rambling out into the road and cars could be driving or reversing around. Bin trucks too.”

When put to her that the council had promised this was an emergency measure and that the families would move in eight months, she said: “We don’t believe council promises”.

One man, said:“ This is not an appropriate site for Travellers. Nobody in the country would accept this.”

Another asked: “Why do they have to come to this field. They have fields all over the country they could go to.”

Martin Collins, director Pavee Point, described the actions of the residents as “vile” and urged the council to proceed with the planned site, by means of a court injunction against the residents if necessary.

The investigation into the cause of the fire continues while DNA and dental records are being used to identify the remains of the five adults and five children who died.

It is thought the bodies will be released back to the families tomorrow or Friday, with funerals likely to be next week.

The funerals of Willie Lynch, his partner Tara Gilbert and their children Kelsey (4) and Jodie (9), and of Willie’s brother Jimmy (39) will take place in Bray, Co Wicklow.

The funerals of Thomas Connors (27), his wife Sylvia (25), and their children Jim (5), Christy (2), and five-month-old baby Mary will take place in Wexford.