Northern society changing slowly from embedded patterns of the past 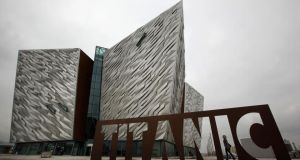 Belfast’s Titanic Quarter. The census shows the NI population is also becoming more “Catholic” in the broadest sense. About 52 per cent of those normally resident in Northern Ireland and who were or are being raised as Catholics are under the age of 35. The equivalent figure for the Protestant community is 40 per cent.

The census shows the population is also becoming more “Catholic” in the broadest sense. About 52 per cent of those normally resident in Northern Ireland and who were or are being raised as Catholics are under the age of 35. The equivalent figure for the Protestant community is 40 per cent.


Sturdy stereotypes
However, freshly analysed and published figures show many of the long-established stereotypes, especially regarding religion and national identity, are proving resistant.

Catholics remain more likely to be without work. They live in larger family units and regard themselves as having poorer health than Protestant equivalents. The religious breakdown of the labour market shows, however, that some old trends are diminishing.

Dr Ian Shuttleworth, lecturer in geography at Queen’s University Belfast, said: “There are now fewer polarised workforces and there seems to be more equal access in gaining employment for both Catholics and Protestants. But the unemployment differential for Protestants and Catholics still exists. Now it’s not what it was 20 or 30 years ago. It might be a function of the younger Catholic population because of the concentration of youth unemployment.”


Shifting ages
The age profile of Catholics remains younger than that of Protestants. As society ages, there is a growing reliance on the provision of informal and unpaid care, mostly by younger people for their more elderly relatives and friends.

Without their help, one Queen’s academic has forecast the “system would collapse”. Dr Dermot O’Reilly said: “They are vital for looking after their neighbours and their kith and kin.”

A large majority, 75 per cent, of new arrivals in Northern Ireland from the 12 countries which joined the EU since the previous census in 2001 is also Catholic. Some 11 per cent, or 202,000, people were born outside Northern Ireland. Of them, nearly half were or are Catholics while 34 per cent were/are Protestants.