Forget fraud: Nigella Lawson and her ex are doing battle for custody of the public’s approval 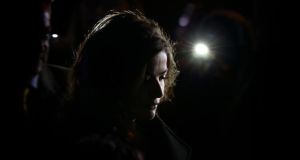 As far as we know Nigella Lawson has never tried to throttle anybody in a restaurant or to commit fraud with another person’s credit card, yet it was her life that was up for dissection in a London court this week. This case, ostensibly about the alleged efforts of a pair of personal assistants to defraud Nigella Lawson’s ex-husband, Charles Saatchi, of large sums of money, is actually about something else altogether.

It is a custody battle, fought to see who gets to keep the good opinion of the general public. On Thursday, after almost two days in the witness box, Nigella was ahead on points.

And the public is working hard for her, trying to rewrite the Nigella story, incorporating what we have learned this week. On the Daily Telegraph website – the Daily Telegraph could be the house magazine of the Lawson-Saatchi families, with Saatchi such a key figure in the Thatcher election victories, and Nigella’s brother, Dominic, once editor of the Sunday Telegraph – readers were already describing Charles Saatchi as Lurch, the Addams Family servant.

One reader passionately declared: “This woman has lost a husband she dearly loved and ended up married to a maniac of whom she is now well rid.”

It may seem remarkable to the rest of us that two people as rich and sophisticated as Nigella Lawson and Charles Saatchi should end up in what amounts to a courtroom brawl – or indeed that they should allow themselves to come to court at all, instead of quietly accepting the alleged loss of £685,000, a sum it took them some time to miss. And one question not asked in court is: why didn’t they simply pay the Grillos a lot more?

But we recognise one thing. Nigella wants our love and Saatchi will use us in order to hurt Nigella. It is a classic custody scenario.

This is the most modern of trials, with media attention itself being used both as a weapon and as a punishment.

Some of the detail revealed at Isleworth Crown Court was irresistible: the judge stopped the defence counsel’s cross-examination of Nigella when she was asked about receiving a Mother’s Day card with a marijuana spliff attached to it.

The trial is not about Francesca and Elisabetta Grillo but about us having the opportunity to snoop around the life that Nigella and Saatchi shared. This it has most certainly done. Never mind Nigella’s alleged drug use: who knew about the room devoted to the silver collection, or that the silver cost £9,600 to clean? Who knew that Saatchi has weak tea and burnt toast for breakfast? Or that he allowed his wife to have only one dinner party in two years? “I was not happy about that,” said Nigella.

Asked if no one ever suspected the amount of money being spent on taxis, Nigella did say that Saatchi had remarked: “Every time I draw up to this house there is a bloody cab.”

Asked by the defence counsel if she would like to see photographs of some of the designer outfits Francesca Grillo had bought, Nigella replied: “If they’re about clothes I wouldn’t bother, because I’m not really very good on fashion.”

It is also the most old-fashioned of trials. In the week preceding it Nigella was the guest beauty editor of Stylist magazine, where she confided: “For me make-up is Sixties make-up, I have been wearing eyeliner and pale lips since I was a teenager.” She loves false eyelashes: “I long to learn to put false eyelashes on myself.”

So it is no accident that Nigella, with her film-star looks, has always looked like a goddess from another era. As she walked into the courtroom it was impossible not to be struck, not just by her beauty but also by the sight of a glamorous, famous woman – let’s be honest, a star – entering battle alone. In fact her brother accompanied her on both days.

The catflick of her eyeliner brought us back to other divas in trouble – not so much the cookery diva Martha Stewart being taken off to jail as the movie diva Lana Turner when her daughter killed Lana Turner’s lover. Nigella looked vulnerable: a beauty mired in scandal. A domestic goddess who had to admit that she had taken cocaine seven times, and a media that had to pretend to be shocked.

Even those of us on Nigella’s side must acknowledge that seven is a strange number of times to have taken cocaine, or to remember having taken cocaine. It just seems awkward, somehow.

But there has never been any real doubt about whether we, the public, would stay with Nigella. We’ll stand by as Team Cupcake – the nickname given to her phalanx of personal assistants – regroups and retrains.