‘New Irish’ Christians gather to vote No in referendum 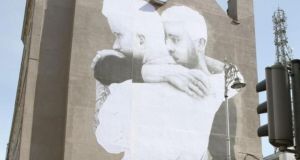 The mural by Irish artist Joe Caslin on the side of a building on Dublin’s South Great George’s Street. Photograph: Brian Lawless/PA

Tens of thousands of Christian immigrants who have become Irish citizens are being mobilised across the Republic to vote down a historic move to legalise gay marriage in Ireland this week.

While liberal Roman Catholic priests and nuns are defying their bishops to urge a yes vote on Friday, religious leaders in the evangelical Christian community are now placing their congregations on the frontline of the battle to persuade Ireland to say no.

The State is the first country in the world to hold a referendum to decide on whether or not the state should allow gay marriage.

If passed, the right of gay couples to marry will be incorporated into the Republic’s constitution.

In the yes corner are radical Catholic clergy such as Sister Stanislaus Kennedy, a lifelong anti-poverty campaigner who backed gay marriage last week.

On the no side, more than 30 born-again Christian pastors originally from Africa and representing dozens of churches are urging their congregations to help defeat marriage equality.

As campaigning enters its last week, both sides accept the gap between yes and no is narrowing.

An opinion poll published by the Irish Times newspaper had the Yes vote on 58 per cent and the No vote on 25 per cent, with 17 per cent indicating they were undecided.

But a previous poll found that, among the age group with the highest voting rate in Ireland – the over-65s– a majority said they would reject the move to equal marriage.

And organisers of an evangelical alliance for a No vote believe that the votes of up to 200,000 African and eastern European immigrants, many of them conservative Christians and Muslims, could help swing the vote in favour of no on May 22nd.

Across the key battleground of Dublin, evangelical and Pentecostal pastors are actively encouraging their congregations to vote no.

Nigerian-born pastor Adewale Kuyebi, from the Christ Apostolic church in the north-west Dublin area of Blanchardstown, predicted that “100 per cent” of his 300 members would be voting no.

“We don’t need to tell them what to do because they already know that it is against the scriptures to allow for same-sex marriages,” he said.

“Our church encourages all our members to vote in this democracy and I am confident all of them are for the no side because they read their Bible and understand what it tells them.

We are using a message from ‘Whatsapp’ to encourage our congregation to get out and vote on Friday.

This app has touched 30,000 believers already and will reach many more over this week because we do not want a godless law being incorporated into the Irish constitution.”

Since the current Fine Gael-Labour government – which is strongly backing a Yes vote – was elected in 2011, about 85,000 immigrants have become Irish citizens.

Campaigners for a No vote claim that in a tight contest their votes will be crucial to the outcome.

Paddy Monaghan, a lay Catholic leader in Dublin, has forged a multi-Christian alliance that includes dozens of African-dominated evangelical/Pentecostal churches.

It has distributed tens of thousands pamphlets across the state.

“African and other Christians from different countries who have come to settle in Ireland have, in my opinion, been missed by the Irish media and the pollsters’ radar,” he said.

“They would be a bit more nervous about expressing their true opinions but when it comes to voting they will get out there and vote no. That is one important reason why I think that the opinion polls have underestimated the support for no.”

Pastor Mike Garba, who preaches at the Mountain of Fire and Miracles church in the mainly working-class Finglas district of north Dublin, said he was also confident that all those eligible to vote in his congregation would vote no.

“Our message to our 250-strong congregation is that if you know the rules then you must vote No. We tell them that if you read your Bible then you know that it is against Christianity to see the same-sexes marrying. It is the same in churches like ours all over the country – 100 per cent no to this,” he said.

Such claims are disputed by the pro-yes Immigrant Council of Ireland.

Chief executive Brian Killoran said: “Active political participation is essential to ensure the integration of citizens of a migrant background and every Irish political party not only has migrant members but during elections actively seeks out the support of their communities.

“We would expect this diversity of views to also be reflected in the referendum. On the yes side we have seen Irish citizens born in countries ranging from Sri Lanka, the US and Poland all involved in public debate.

In addition Ireland’s only migrant senator, Katherine Zappone, is a leading figure in the national Yes campaign.”

Meanwhile, Kennedy, one of Ireland’s most famous nuns, defied her bishop in Dublin, Diarmuid Martin, by coming out publicly to back a yes vote.

Sister Stan, as she is affectionately known due to her work with the homeless and poor in the Irish capital, said: “I have thought a lot about this. I am going to vote yes in recognition of the gay community as full members of society. They should have an entitlement to marry. It is a civil right and a human right.”

One of Ireland’s most instantly recognised priests, the broadcaster and newspaper columnist Fr Brian D’Arcy has watched an increasingly rancorous campaign from his home across the border in Northern Ireland.

While refusing to say which way anyone should vote next Friday, D’Arcy disputed doom-laden warnings from both the Catholic hierarchy and other Christian churches springing up all over Ireland that a yes result would spell the end of traditional marriage.

“It will not be an apocalyptic day for marriage or the family. We would be simply redefining marriage in a different way. And a Yes vote would not change the sacramental meaning of marriage inside a church or holy place at all,” he said.