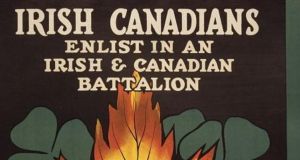 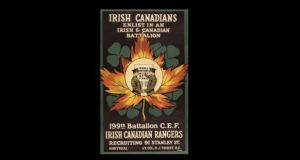 Almost 20,000 Irish soldiers served in the Canadian army during the first World War, according to new figures.

A total of 19,327 of those who served in the Canadian Expeditionary Force were from Ireland.

The number comes from an unpublished document in the Department of National Defence in Canada, but it may well be an underestimation.

Many of those who enlisted in the Canadian army from across the border in the United States would have been regarded as American.

Canada’s involvement in the first World War was immense, with 630,000 enlisting out of a population of just eight million. Some 60,661 were killed.

No breakdown by nationality has been done for Canada’s casualty figures. However, on a pro-rata basis, the figures suggest that about 2,000 Irishmen probably died in the first World War fighting for Canada.

Among those who died was Jimmy Duffy from Co Sligo. He was regarded as one of the best marathon runners in the world at the beginning of the 20th century. He won the Boston Marathon in 1914.

Living in Canada at the time, he enlisted in the Canadian army and was killed at the Second Battle of Ypres in May 1915, eight days before his 25th birthday.

He is one of 11 men from Sligo who died in the Canadian army and are included in a new local history project which seeks to find a more definitive figure for war dead from the county.

Unlike the other British dominions as they were at the time, Canada went out of its way to specifically recruit Irish soldiers and a number of Irish battalions were raised during the war.

The Canadian Expeditionary Force and and an Irish regiment, the Royal Irish Lancers, were involved in the last Allied action of the war, the liberation of Mons on Armistice Day 1918.

Some two million men, known as the “Doughboys” served in the American Expeditionary Force, but no breakdown has been done by nationality.

Given that the Irish-born population in the US was some 1.3 million in 1910, it is possible that some 40,000 Irishmen saw service with the American army.

A definitive figure has never been established as to exactly how many Irish soldiers died fighting in the first World War.

Trinity College Dublin (TCD) historian Professor John Horne, who is an expert on first World War casualties, said the number of Irish who fought and died in all armies in the war is “unknown” and more research needs to be done.

He maintained that we will never know for certain how many Irish were killed in the war until the casualties of armies other than the British army are sifted through.

The Irish War Memorial Records lists 49,400 dead from Irish regiments in the war. However, not all of those who died were Irish while many of the Irish, who died in non-Irish regiments, are not included.

He said the biggest proportion of those missing from the current list in the Irish War Memorial Records are those who enlisted as emigrants in England, Scotland or Wales and are not counted as Irish war dead.

“If we can filter out the non-Irish who fought in Irish units and include those Irishmen who have emigrated first and gone into other units of the British army, we might get closer to the true figure,” he said.

The latest research contained in the Complete Cambridge History of the First World War earlier this year suggested that the war dead which is commonly accepted at around 10 million should be revised upwards by at least 400,000 to include those who died of disease, wounds or in prisoner-of-war camps.