New emigrants to US have skills and opportunities, President says 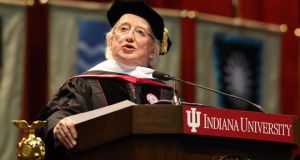 Many new emigrants to the United States, while feeling a sense of loss at leaving Ireland, are highly skilled and have opportunities to use those skills after emigrating, President Michael D Higgins has said.

Speaking at Gaelic Park, an Irish community centre in Oak Forest on the southwestern outskirts of Chicago, Mr Higgins said there was “never any one kind of Irish migrant coming to the United States”.

“Many of the Irish who are coming now do feel a wrench and a sense of loss having to leave their family, their parish, their locality, but they are very highly qualified and carry very high skills - and they get opportunities here to put those skills into practice,” he said.

Irish and American companies shared the challenge of creating jobs to offer “life opportunities to highly skilled people wherever they are”, he said.

As President, he wanted to express in practical ways that the Irish diaspora was a network that helped people in their immediate needs and in “mapping out futures which we can share together”.

The final three days of his five-day visit to the US are being focused on meetings with the Irish community in the Chicago area. He will meet Illinois governor Pat Quinn tomorrow.

On the third day of the visit, Mr Higgins was greeted at Gaelic Park by young football and hurling players wearing county jerseys before attending an Irish community Mass.

The President told reporters that Irish centres like Gaelic Park were “incredibly important” in helping the “new Irish arriving in a strange city” find something that is “very much of your own experience”.

The GAA was one of “the most obvious places” connecting Irish emigrants to people they will “realise easily”. “It is a great assurance for a start,” he said. “It is a form of shelter for people in difficulties.”

John Devitt, president of Gaelic Park, who left Ireland for the US in 1975, said the recent wave of Irish emigrants was different in that they had third-level degrees and professional experience.

“They are carrying computers and degrees rather than hods of bricks, chainsaws or paint brushes,” he said.