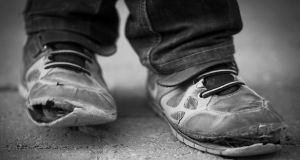 Some 140,000 children are living in consistent poverty.

Almost 140,000 children in Ireland are living in consistent poverty and one-parent families are twice as likely to be living in poverty as the rest ot the population, latest figures show.

Some 8 per cent of the population is in consistent poverty, with the highest rate among unemployed people at 22.6 per cent, according to the Central Statistics Office’s Survey on Income and Living Conditions for 2014.

To be ‘at risk of poverty’ is to be dependent on an income set at 60 per cent of the median, which last year was a threshold of €10,926 per year.

The CSO said the ‘at risk’ of poverty rate was 16.3 per cent compared with 15.2 per cent in 2013 and that this change was not statistically significant.

Enforced deprivation was experienced by 29 per cent of the population last year, down from 30.5 per cent the year before. Again, the CSO said the change was not statistically significant.

The group at greatest risk of poverty was the unemployed, with 36 per cent of this sector at risk in 2014, compared with 37 per cent in 2013. Also at risk in large numbers were students (34 per cent).

Some 32 per cent of households headed by single parents were at risk of poverty last year, compared with 31.7 per cent in 2013. Single parent households, however, suffered the most deprivation of all groups, with 58 per cent of those at risk of poverty experiencing two or more types of “enforced deprivation” such as not being able to afford to have friends or family over for a meal or drink, or to replace worn out furniture.

The most common types of deprivation were an inability to replace worn out furniture (25.5 per cent), inability to afford a morning/afternoon/evening out (22.2 per cent) and an inability to have friends or family over for a meal or drink (19.3 per cent).

The St Vincent de Paul (SVP) charity said very little had improved for the people that the society assists, “in spite of the economic upturn”.

Head of social justice and policy John-Mark McCafferty said calls for assistance to the charity remained stubbornly high and continued at twice what they were in 2009.

He noted the consistent poverty rate for the border, midlands and western region was 10.8 per cent compared with 7 per cent for the south and eastern region.

“More than one third of households who are renting their accommodation at below the market rate or rent free are at risk of poverty, reflecting the extent of poverty and low incomes among those living in social housing.”

The CSO figures also showed an increase in the risk of poverty rate for those who are in private rented housing, with almost a fifth of such households at risk of poverty.

Barnardos, an advocacy body for children’s rights, said the lack of improvement in child poverty rates was “extremely distressing”.

“We would expect to have seen the beginnings of a reduction in child poverty rates in 2014,” he said. “However one in nine children still live in consistent poverty and more than a third of children experience deprivation, while the number of children at risk of poverty has not improved since 2010. This puts paid to the rhetoric that ‘a rising tide will lift all boats’.

Mr Finlay said two children in every classroom were living without access to basic necessities through no fault of their own or their parents.

“They are going without warm winter clothing, living in substandard housing and even going hungry.

“Just think about what it means for the future of Ireland. These are the children who may well be the early school leavers, the ones who will live a life of dependency and alienation. We know enough about this by now to realise that if we don’t break this vicious cycle, its effects will last for generations.”

“It is unacceptable to continue to sentence a generation of children to a lifetime of poverty and poor life chances. People parenting alone tell us ...that they constantly live on the knife edge of poverty. Government continues to enforce ill-formed activation measures without the provision of effective supports such the long-promised, affordable quality childcare.”

However, Tánaiste and Minister for Social Protection Joan Burton, welcomed a reduction in the national levels of deprivation rate from 30.5 per cent to 29 per cent.

“More and more people are now clearly beginning to feel the benefits of the strong economic recovery being driven by Government,” she said. “The Government’s priority is to create jobs and reduce unemployment. Unemployment is now down from a crisis peak of 15 per cent to 9 per cent and long-term unemployment is down from 6 per cent last year to 5 per cent.

“I am confident that the actions of the Government to increase employment and to boost low and middle incomes will help to achieve the national poverty target.”

Director of Social Justice Ireland, Dr Sean Healy, said the figures provided “conclusive evidence that, despite what we are being told, government policy has failed to protect our society’s most vulnerable, or to significantly ease their difficult circumstances”.