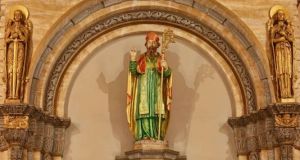 The Catholic Church hierarchy played a “central role” in organising US adoptions even though “it had no formal legal or regulatory role in either foreign or domestic adoptions”. Photograph: Getty Images

Official records show that between 1922 and 1998, 1,638 children who were resident in mother and baby homes and four county homes were placed for foreign adoption – 1,427 children went to the US.

Noting that “many allegations have been made” about payments, the commission said it is unlikely that there would be any documentary evidence of any such transactions.

Some of the language used by those looking to adopt was “crass”, the commission said. “Some had an undue sense of entitlement – they were good people and should be given a child. Others were very specific in their requirements.”

One woman told Galway County Council that she wanted a blonde, blue-eyed girl. “Such language displays a sense of entitlement, but it does not necessarily mean that they were ‘buying’ children,” the commission found.

Donations made to homes “would not have been illegal, and could not be described as unethical unless the adoptive parents were trying to adopt another child”, the report finds.

One “substantial donation”, however, was tracked from an American who transferred $3,000 worth of shares to Bethany, a home run by a Protestant charity. The shares were eventually worth £1,267 16s 6d.

Between 1922 and 1988, 149 children were sent for adoption to Great Britain; 39 to Northern Ireland; five to Canada; four to Saudi Arabia; two each to Australia, Egypt, Italy and Venezuela; one each to Guernsey, Germany, Serbia, Singapore, Norway and the Philippines.

The Catholic Church hierarchy played a “central role” in organising the US adoptions even though “it had no formal legal or regulatory role in either foreign or domestic adoptions”.

“Its main interest was in securing what was seen as the child’s religious welfare but its insistence on standards for prospective parents, their homes and their material wellbeing did promote the welfare of the children concerned.”

It was usually the case that the mother of the child “surrendered” the child to an authority that could organise a foreign adoption.

“This was usually the person in charge of the mother and baby home where the baby was born – the mother superior in the case of the homes run by Catholic orders,” the report says.

The legal validity of such a surrender was “questionable” in some instances.

Noting the attitude of the State, the commission found that people believed that children would be “better off” going to adoptive homes, particularly in the US, rather than being placed in orphanages and industrial schools in Ireland.

The report details how in January 1952, an official in the Irish Embassy in London contacted the Department of External Affairs in Dublin about issuing a passport for a child who had been placed by St Bridget’s Orphanage with a US army couple, taken to the UK without any travel documents with plans to move on to the US.

The London official said that “the papers appear to be in order” but the Department of External Affairs official was concerned that they were not.

They said “supposing it happened that the child was surrendered to persons who, on arrival in the USA, proceeded to sell it off to the highest bidder, with consequent press publicity etc. It is we who would be held responsible as it is we who would have to answer parliament questions, face a press campaign here and so on”.

Soon after this the Passport Office drew up “relatively robust protocols in conjunction with Archbishop McQuaid and with the assistance of the Catholic charities in the USA”.

Level 5 restrictions set to be extended until March 6th with clamp-down on travel 22:16
Man who saw his death announced on TV in October Crisis 50 years ago dies aged 99 21:30
Number of people charged with domestic violence surges amid pandemic 21:08
Coronavirus: Vaccination of over-70s to start next month, says Donnelly 20:55
Cabinet to discuss legislation allowing for Limerick mayoral election 20:36