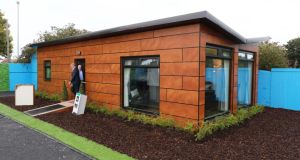 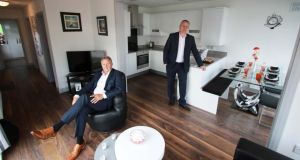 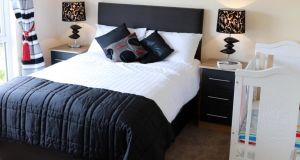 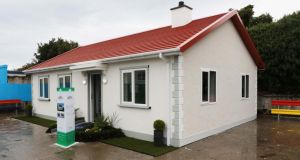 The mayors of the four Dublin local authorities will view six samples of “cellular modular housing”, from six providers, which have gone on display. Above is a home by Skyclad. Photograph: Nick Bradshaw/The Irish Times 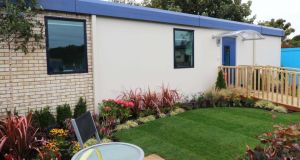 A home built by Portakabin at the exhibition. Photograph: Nick Bradshaw/The Irish Times

Dublin City councillors will on Tuesday view factory-built houses which could be used to accommodate hundreds of homeless families currently living in hotels.

The mayors of the four Dublin local authorities will also view six samples of “cellular modular housing”, from six providers, which have gone on display.

Dublin Region Homeless Executive is hoping the exhibition will help win support for its proposals to erect up to 200 units of such housing on sites across Dublin.

This housing is made off-site and can be assembled, fully plumbed, wired and decorated, on-site, within a day.

If the DRHE plan gets the backing of councillors and the Government, dwellings could provide temporary housing for homeless families. Some have been living in single hotel rooms for up to two years, often without cooking facilities.

The project comes as the latest figures show the number of homeless children in Dublin reached 1,275, in 607 families, last month. This compares with 1,185, in 556 families, in July. Of these homeless children, 850 in 404 families are being accommodated in hotels.

To the end of June, DRHE spent €4.5 million on hotel accommodation for homeless families.

Among the possible alternative accommodation to single hotel rooms which is now on display is a 56 sq m, fully insulated two-bedroom unit from Modular Homes Ireland.

With floor-to-ceiling windows in the living-cum-kitchen area and a B1 energy rating, it is warm and bright. It comes with a fully-fitted kitchen and bathroom, two good-sized bedrooms and storage space. It was assembled on-site in two hours, according to Tommy Forbes, one of MHI’s founders. It costs €85,000.

Across the site is an 80sq m unit, from MOM Services Ltd. Also two-bedroom, it has larger rooms, with the kitchen and living area alone coming in at 30 sq m. It took five days to construct and less than a day to assemble. It would cost €69,000.

London architect Tom Teatum, who has been involved in the provision of modular housing in the UK for students and homeless families, said such housing was “in many ways better” than traditionally built housing as there could be greater quality control over the production process.

Cathal Morgan, director of the DRHE, said this type of housing was relatively new to Ireland, but was used elsewhere. “These examples of what can be done are absolutely excellent, not just in terms of quality but also the speed with which they can be assembled,” he said.

If the DRHE proposal gets political backing, councils will have to go through the usual planning and procurement processes.

Mr Morgan said he hoped the procurement process could be fast-tracked, as he would like to see the provision of such homes “as soon as possible”, probably by the summer.