Minimum price for alcohol to be introduced 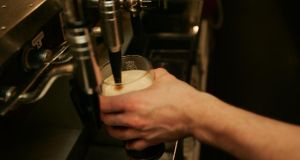 The Government has shelved plans to ban the sponsorship of sporting events by drinks companies but it will proceed with the introduction of a minimum price regime for alcohol.

The cabinet today decided to proceed with a range of measures to try and control the abuse of alcohol but the proposed sports sponsorship ban which was due to come into force in 2020 has been kicked to touch.

Instead, a working group under the Department of the Taoiseach will report back in 12 months on the implications of the ending of sports sponsorship.

An outright ban will only be considered if and when other means of funding sport have been identified and secured.

The cabinet decided to press ahead with a range of other measures designed to curb the abuse of alcohol, particularly by under-age drinkers.

The main element of the plan is the introduction of minimum prices for alcohol. The new pricing structure will be calculated on the sale price per gram of alcohol.

The system will be introduced after consultation with the Northern Ireland authorities to ensure that there are no major differences in the price structure on both sides of the border.

The is a question mark over whether a minimum price arrangement will be legal under EU competition law but the Government has decided to press ahead.

Another element of the plan will be a ban of drinks advertising on television during the day and early evening and it is expected that a watershed time limit of 9 pm will be introduced.

There will also be a ban on drinks advertising in cinemas during films that are screened for people aged under 18.

New regulations for the display of alcohol in supermarkets and other retail outlets will also be introduced. A strict code for separating alcohol from other products will be policed by environmental inspectors.

A new labeling regime for alcohol products with health warnings and a clear statement of the alcohol strength and calorie count also features in the plan.