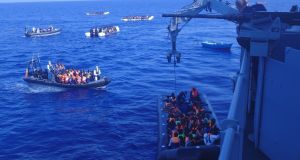 Defence Forces personnel who have helped save the lives of migrants in the Mediterranean Sea are are to be recognised for their humanitarian work.

The new Defence Forces International Operational Service Medal will be awarded to members of the Irish Army and Navy, as well as the Army nursing and the chaplaincy services, for work on humanitarian missions.

The medal is aimed directly at personnel who have been involved with Operation Pontus, code name for humanitarian operations between Libya and Sicily rescuing migrants fleeing North Africa.

Generally, members of the Defence Forces deployed on missions are awarded medals by the UN, the EU or Nato, but this has not applied to humanitarian work such as Operation Pontus.

Minister of State with responsibility for Defence Paul Kehoe made the annoucement about the new medal at Cagliari in Sardinia on Sunday where he met the crew of LÉ James Joyce and its captain Lieutenant Commander Neil Manning.

The ship is currently assisting Italian authorities with rescuing migrants from the Mediterranean.

Mr Kehoe spoke to the ship’s crew of his continuing gratitude and that of the Government “for the outstanding role you have played in saving the lives of men, women and children, who are fleeing desperate circumstances.”

Their work highlighted the Government’s ongoing commitment to prevent further tragedy and loss of life at sea, he said.

“The rescue of over 11,500 migrants, to date, by Irish Naval Service vessels demonstrates clearly the value of Ireland’s participation in this important humanitarian response,” he said.

Highlighting the voluntary nature of the mission, he thanked families and partners for the sacrifices they too were making. “They are often the unsung heroes of such missions,” he said.

The new medal will be presented to relevant Defence Forces personnel at a special ceremony in Rosslare, Co Wexford, towards the end of next month.