Marwa is 16. She is engaged, just like four of her classmates 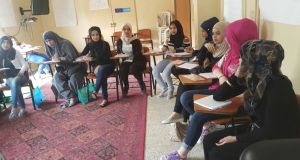 Changing course: teenage girls at a workshop that Akkar Network for Development hopes will help them develop some independence

Marwa is 16. It’s been nine months since she got engaged to a man seven years her senior. In Hrar, a village in the Akkar region of northern Lebanon, this is no surprise. It is quite the norm. Two of her classmates have already dropped out of school to be wed. Four more are engaged.

“In our traditional Sunni society, young people are not allowed to mingle without being engaged,” Marwa says. She should be married by next year at the latest: that is the limit her father has consented to. She will be 17 and, she hopes, a high-school graduate.

The teenager says she wishes she could enroll at university in Tripoli, the capital of northern Lebanon, study chemistry and open a lab. But her fiance is in a hurry and wants to bring forward their wedding date.

She acknowledges that he “is a poorly educated mechanic earning an honest living” and that he hasn’t come to terms with her professional ambitions. “He’s tried to make me drop out of school. At the same time he promises me a car to go to university and to the lab of my dreams.”

At his request she agreed to take a year off, once married, before going to university. But if she gets pregnant and her husband forbids her to pursue her studies, or forces her to wear an abaya, a full-length sleeveless dress, what will she do? “I can be stubborn,” she says.

The women of Hrar, Fneydek and Mechmech, like those of the Akkar’s hinterland or other rural parts of Lebanon, are brought up haunted by the fear of never marrying. Sex before marriage is forbidden – family honour would be tarnished. According to the locals, marriage is the best way to protect young girls as they become teenagers.

Disillusioned, many women regret having wed too early. Among them, Fatme, a 17-year-old mother of a one-year-old, wonders what she has done with her life. “Can a child raise a child?” she asks.

She feels nostalgia for her school and classmates. She wishes she could have continued her studies, and learnt English and computer science, but her husband refused because she rubbed shoulders with boys at school. He forbids her to see her own girlfriends. “I am confined within the house, taking care of my son and washing the dishes,” she says.

“Luckily her husband is generous,” her mother says.

It is in this context that Akkar Network for Development, an NGO, intervenes, led by the dynamic Nadine Saba. Her aim is to fight violence against women in all its aspects, early marriage being among them. “We have no ambition to change mentalities or habits. But we can stir up a hornets’ nest,” she says.

Saba is realistic. The only way for her association to protect women and teenage girls is to make them aware of their rights, their health and their legal situation, and to launch development projects in this poverty-struck region. She got involved in forest protection, waste recycling and even road repair to encourage youngsters to participate in community work and help them develop their skills. “We even sometimes distribute financial aid,” she says.

How does her organisation achieve its goals? “We prioritise projects that don’t anger up the blood, such as child labour, marriage registry, family and religion,” Saba says. “We create a trusted relationship with local communities and religious leaders, because we can’t have access to women if we choose confrontation.”

It is during awareness sessions, or life-skill workshops – in sewing, literacy, computer science and more – that psychotherapists and social workers bring up taboo subjects. Among them are domestic violence, family planning, reproductive health and any consequences of early marriage.

“Over time women get to talk more openly about what bothers them. They ask for information about pregnancy and contraception,” she says. Some even manage to gain a certain level of financial independence, either by working at home or selling something that they have made.

“At that point we can work with women victims of abuse or violence. And we can manage to convince mothers and teenage women to delay marriage, at least long enough for the young girl to graduate,” Saba explains. “It is important to show them that there are other options in life besides marriage.”

In the hope of a policy for national development in the Akkar region that could offer these young girls alternatives, Saba, her organisation and its sponsors capitalise on their successes.

A mother impatient to get her 16-year-old daughter married came to understand the physical and psychological health risks her daughter would encounter. “Not until she graduates,” she now promises.

Even better, local men are now lending an ear, in the context of group discussions.