Thousands of people take part in demonstration in central Dublin 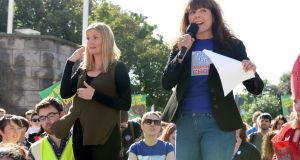 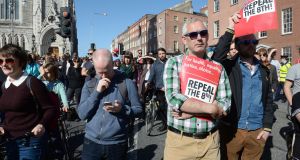 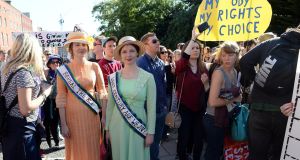 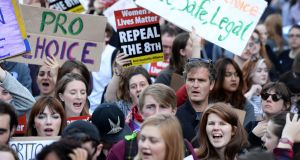 Thousands of people took part in the March for Choice organised by the Abortion Rights Campaign at Merrion Square in Dublin. Photograph: Eric Luke/The Irish Times.

Organisers of a pro-choice march in Dublin which attracted thousands of demonstrators have called on political parties to hold a referendum on abortion within the lifetime of the next government.

Thousands of people from campaign groups, trade unions and political parties marched from the Garden of Remembrance to Merrion Square on Saturday as part of an annual “march for choice”, calling for greater access to abortion.

Gardaí declined to put an official figure on the numbers, but some members of the force estimated turnout at up to 10,000.

Claire Brophy, a spokeswoman for the Abortion Rights Campaign, said the numbers, along with latest opinion polls, reflected a strong appetite to liberalise the country’s abortion laws.

“This is the last march before the general election and demonstrates that this is an election issue for the vast majority of people.”

Speaking at the conclusion of the rally, Colm O’Gorman, executive director of Amnesty International Ireland, said governments could no longer stand over laws which violated the human rights of thousands of women.

“It’s not good enough for politicians to say, ‘now is not the right time.’ The time may not be right for you - but the time is right for us, the Irish people,” he said.

Earlier in the day, however, Labour Minister of State Aodhán Ó Ríordáin said he believed pro-choice campaigners were “nowhere near” winning it.

“But it’ll happen, I would imagine, quite late towards the end of the [next] government because we’re nowhere near winning it.”

Saturday’s march was a noisy and colourful affair, with many carrying trolley bags and home-made posters, while demonstrators were dressed as suffragettes and bishops.

Among those taking part in the demonstration were a group of Socialist MEPs from various EU countries, trade union groups, political parties and an array of campaign groups and non-governmental organisations.

Some of the placards read, “Women just want fun-damental rights”, “Not a vessel” and “Your body, your life, your choice.”

Independent TD Clare Daly told the gathering that the movement to repeat the eight amendment was now an “unstoppable force”.

The stories of an estimated 170,000 Irish women who have travelled abroad for abortions since the early 1970s could not be silenced any longer.

“The days of secrecy and shame, of the Magdalene laundries and the Mother and Baby homes belong to a different Ireland. An Ireland we want no part of, except to say ‘sorry’,” Ms Daly said.

Valerie Molay, of the migrant support group Akidwa, said restrictions on abortion were placing vulnerable women at risk and forcing them into humiliating situations.

“Women in direct provision, undocumented woman, even women who have papers still have to go through a visa process, and feel humiliated, embarassed, powerless and at the mercy of this racist system,” she said.

In response to the march, Dr Ruth Cullen, spokeswoman for the Pro Life Campaign, said organisers were in “absolute denial regarding the hurt and heartbreak caused by abortion for many women.”

“Sadly, there will be no time set aside at today’s march for the stories of the thousands of Irish women who travelled abroad for abortion and deeply regret their decision.

“Nor will there be any mention of the thousands of Irish women who came very close to taking the advice of pro-choice counsellors to opt for abortion only to change their minds at the last minute.”