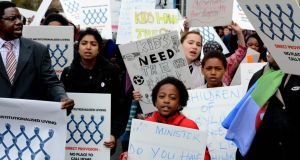 Almost 60 per cent of asylum seekers in Ireland have lived under direct provision for over three years, according to a new report from the Economic and Social Research Institute (ESRI).

The report, published today, highlights a drop in the number of asylum seekers accommodated in Ireland but states the reception system here is unsuited to long-term residence.

Over 4,800 asylum applicants were being accommodated in 35 reception facilities in 2012, down from just over 5,400 residents accommodated in 39 centres in 2011, according to the Organisation of Reception Facilities for Asylum Seekers in Ireland.

Accommodation centres are managed and run by private entities under contract to the State.

Asylum seekers are prohibited from working while their application is being processed. Adults receive €19.10 a week (€9.60 for a child).

The report noted asylum seekers experience a lack of privacy, overcrowding, insufficient facilities such as homework/play areas for children and limited autonomy, especially regarding food.

Minister for Justice Alan Shatter has said direct provision is not suitable for long term residence but has defended its maintenance on cost grounds.

“In the context of the expenditure involved, it is the most economical way of providing for those who are effectively in the country illegally but who are seeking permission to stay for a variety of reasons,” he said last year.

While in opposition, Mr Shatter compared the system to the operation of prisoner of war camps and said it was “not the type of approach that a civilised democratic western European country should apply in any situation”.

The authors of the report also noted that a legislative basis for direct provision did not exist in Ireland. “The current system is based on a combination of administrative decisions and Ministerial Circulars. Ireland does not currently operate a single procedure for the processing of applications for international protection.”

The Irish Refugee Council said the Government needed to “draw a line under direct provision”.

Responding to the report, the organisation’s chief executive Sue Conlan said: “Minister Shatter’s acceptance that direct provision centres are not suitable for long term residence has to be followed by a commitment to draw a line under direct provision.

“A new single procedure for asylum claims will not address the needs of those currently in the system and is not therefore an answer to the acknowledgement that the current system has much too high a price both for the state and for those who languish in it”.

“It is a quick and direct solution that will help ease the excessively long waiting periods asylum seekers experience living in the direct provision system,” said the organisation’s chief executive Fiona Finn.