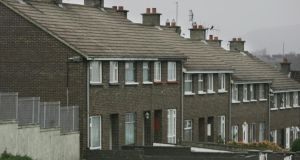 Limerick City and County Council is failing to meet two of the objectives set out in its latest regeneration plan, according to an internal council report.

Part of the council’s objective under the plan was to boost house prices and increase the number of shops within the four regeneration areas in Moyross, Southill, Ballinacurra Weston and St Mary’s Park.

The report notes that only six houses were sold in these regeneration zones between February 2014 and February 2015.

The average price was €17,500, whereas analysis of the Residential Property Price Register showed the average price of a house in Limerick city and suburbs in the same period was €116,000.

A monitoring report on the Limerick Regeneration Framework Implementation Plan, which was adopted by the council in February 2014, found “house price sales are stagnant or decreasing in value, which indicate a low demand at present”.

Despite the monitoring report’s findings, Limerick council says the situation is improving.

“There is evidence emerging of people wishing to purchase housing on the private market within the estates, helping improving demand within the regeneration areas and positively contributing to housing market and tenure change. This will be analysed further in the 2016 annual monitoring report,” a spokesperson for the council said.

However, interviews with local auctioneers indicate that demand in these areas remains poor.

John de Courcy of deCourcy Estate Agents said purchases came only from those with families in the regeneration zones, with little interest from outside buyers.

With regard to retail, the report outlines how the only related activity between February 2014 and February 2015 was a small extension to an existing shop and the opening of a new fuel yard at Bennetts, Roxboro Road.

Derek Coyle operated a Eurospar shop in Moyross until its closure this year. While the main reason for the closure was a growing insurance premium, the long-standing policy of moving people out of the zones also contributed to it, he said.

“The depopulation was a major factor, because it meant we were losing so many customers. They knocked down 500 or 600 houses and moved people out. That’ll have a huge affect on any businesses in there.”

Moyross parish priest Fr Tony O’Riordan said there had been an absence of economic planning in the area.