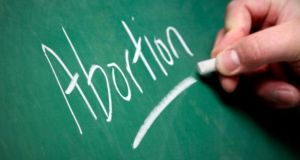 The Life Institute has criticised the latest Irish Times/Ipsos MRBI poll question on whether a referendum should be held on the issue of abortion, claiming it was misleading because it contained the phrase “where the foetus will not be born alive”.

The poll, conducted among 1,200 adults aged over 18, showed 68 per cent of respondents supported holding a referendum, while 23 per cent were against and 9 per cent had no opinion.

“There are no medical conditions for which it can be determined with certainty that a foetus will not be born alive,” said Ms Uí Bhriain.

She mentioned the case of Elaine Fagan of Limerick, who was born with Trisomy 18, or Edward’s Syndrome, a chromosome disorder in which 90 per cent of sufferers do not survive past their first birthday. Ms Fagan lived until she was 25 and died in 2011.

Ms Uí Bhriain suggested alternatives to the poll questions. “If instead you ask, ‘Do you believe children with a profound disability have a right to life, however short that life may be?’ you’d get a totally different result than the one gotten by The Irish Times,” she said.

“If you ask people: ‘Do parents in these situations deserve better care, including new forms of care, such as perinatal hospice care, which helps parents make the most of the time with their children?’, I’m sure you’d get a very positive response to that.”

Likewise, Caroline Simons, legal consultant to the Pro Life Campaign, said that stating there are situations where the baby will not be born alive “is a total distortion of the true picture, since no doctor can say with certainty that a baby will die in pregnancy or even in the newborn period”.

Alison Begas, chief executive of the Dublin Well Woman Centre, said however that it should not be beyond possibility to draw up a list of medical conditions that are not compatible with life, such as anencephaly, in which babies are born without major parts of a brain. “There are some conditions incompatible with the baby living,” she said. “Simply providing abortion in this country doesn’t mean every woman will choose to terminate her pregnancy.”

“In cases of couples who feel they can’t continue with the pregnancy, they should have the choice to terminate it and the availability to do so in this country while remaining under the care of their own obstetrician,” Ms Begas said.