Leo Varadkar shows there’s no standard way to come out 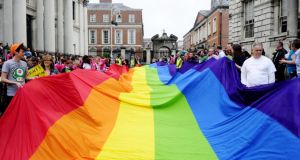 Most LGBT people won’t have to come out on radio like Minister for Health Leo Varadkar, but there is still pressure involved in the process. File photograph: Aidan Crawley/The Irish Times

Most gay people won’t have to come out on national radio as Minister for Health Leo Varadkar did on Sunday. The Minister’s coming out was different, but there is no average story.

Speculation, and pressure to come out, is something that LGBT (lesbian, gay, bisexual and transgender) campaigner Ailbhe Smyth thinks is unfair. “There is still that pressure on lesbian or gay people to go public. There is something voyeuristic about it and it is about maintaining a difference,” she says. “ There is a responsibility on straight people now to wonder ‘how many people do we need to come out publicly’?”

In Woman In The Making, the memoir of LGBT activist and drag artist Rory O’Neill (aka Panti), he recalls the moment he came out to his mother. “My mother, in the context of some long-forgotten conversation, said, ‘Well, it’s not like you came home and told us you were gay and have Aids’. “And in that moment, as my unsuspecting mother drove along the long, straight Curragh Line across the flat bog, I thought what she was really saying to me was, ‘I know you’re gay, son, so let’s just get that out of the way and while we’re at it will you just reassure me that there’s nothing more to worry about than a bout of hepatitis?’.

“And I, with some relief, replied, ‘Well, I don’t have Aids but I am gay,’ and my mother nearly drove off the road.”

Cormac Cashman (27) runs several gay club nights in Dublin. “When I was the welfare officer in Trinity, because I was gay and a welfare officer, I guess more people who were gay felt they could come in. You would have people getting kicked out of their houses. There were foreign students who were Muslim who were trying to deal with it. They were coming out to their friends here, but tentatively, because they couldn’t go back to where they were from and come out to their families, so it was a double life for them.”

For Cashman, even though he felt his parents would be supportive, coming out was still difficult. “I knew my parents were going to to be fine with it, but you still have that ‘I have to get these words out of my lips’ moment. I felt that the sentence was almost physically in my mouth and that I had to push it out.”

The process of coming out is also continuous, especially if you move from country to country. Sonya Donnelly (32) from Cork, works in human rights law with refugees and asylum seekers. She is currently based in Turkey with the United Nations.

“I’m out for 11 years, and I’ve never felt the need to hide my sexuality with friends before,” says Donnelly. “When I was working in Malawi, I had to hide it in the workplace, but not with my friends there. “Last year I was working in Somalia and living in a compound, and as a result I wasn’t able to come out. On my birthday, the newspapers were going wild with the Ugandan “Kill The Gays” Bill. I was sitting around with my colleagues, humanitarian workers all of them, and they started talking about how western groups were obsessed with ‘the gays’ and they should focus on real problems with developing countries,” she says.

“And then I knew I’d made the right decision in not coming out to them, but I had to leave the group to go and compose myself because I was so angry. It that’s kind of anger where you just want to cry. And I was in a compound, in Somalia, and I’ve never felt so alone.”

Vickey Curtis (33) a theatre writer who works in RTÉ television, thinks interest in coming out stories is because “people love knowing other people’s business, first and foremost. They attach bravery and courage to it. It’s actually not about bravery and courage, it’s about honesty. Being brave is dismantling a bomb on a train,” she says.

For Curtis, the end result of coming out is simple: happiness.“It is about a happier existence. Being honest is the easiest thing to do. Lying and telling people ‘Oh I went to Coppers’ when you went to The George – that wastes an awful lot of energy. Being happy is an easy thing. Not being at ease with yourself is the harder option.”