Laying the tracks to liberation: The original contraceptive train 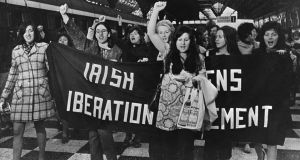 Activists on the platform of Connolly Station, Dublin in 1971 prior to boarding the Belfast Train to buy contraceptives. Photograph: The Irish Times

The Irish Women’s Liberation Movement secured a sensational publicity coup in 1971 when members boarded the so-called contraceptive train in Dublin and travelled to Belfast one Saturday in May.

While contraception was illegal in the Republic, it was legally available although restricted in Northern Ireland. Some 49 women made the trip and the event they staged was captured by photographers and filmed by TV crews from all over the world. They went to a pharmacy where they had hoped to buy the pill, only to be told that they needed a doctor’s prescription in order to do so.

The women did manage to buy large amounts of condoms and contraceptive jelly.

Leading member of the movement Nell McCafferty recorded how, instead of the pill, the women bought hundreds of aspirin tablets on the assumption that any Customs officers they encountered on their return to Dublin would not know the difference. When they got back, some of the women publicly swallowed some of the “pills” after declaring their purchases but refusing to hand them over.

The taboo against discussing contraceptive practice was smashed, McCafferty wrote.