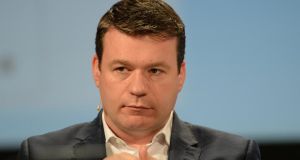 Minister for the Environment Alan Kelly: has ordered a review of the building regulations because of what he said were “outlandish charges” being sought for inspections required under the new system. Photograph: Cyril Byrne/The Irish Times

Builders of one-off houses could be allowed to opt out of a compulsory certification system introduced last year to protect homeowners from buying defective buildings.

Minister for the Environment Alan Kelly has ordered a review of the building regulations because of what he said were “outlandish charges” being sought for inspections required under the new system.

The regulations were introduced a year ago by Mr Kelly’s predecessor Phil Hogan to end the system of self-certification, which resulted in schemes such as Priory Hall being certified as safe.

The north Dublin apartment complex, built during the boom by former IRA hunger striker Tom McFeely, was evacuated by order of the High Court more than three years ago after it was found to be a fire trap. It is being rebuilt by Dublin City Council at a cost of €27 million.

Since the regulations were introduced, more than 6,000 homes have been built, 1,000 of which are one-off houses. Mr Kelly is considering allowing builders of one-off houses to “opt out” of the certification requirements.

The assigned certifier and the builder are both required to certify that a finished building complies with the requirements of the building regulations.

Compliance documentation must be submitted to local authorities and inspection plans must be set out and executed by the certifier.

In addition, mandatory certificates of compliance must be signed off by the designer prior to construction, and by the assigned certifier and the builder when a building is complete.

Mr Kelly said the “cost burden”, particularly for those building their own homes, had become a cause for concern.

“A number of cases have been brought to my attention and my colleague Minister Coffey whereby consumers have been quoted outlandish charges for professional services in relation to residential construction projects.”

A second would be to broaden the pool of people who can design, inspect and certify buildings, to increase competition in the market and reduce prices.

A third option would see no change in regulatory requirements but would set out guidance on the fees for certification of single dwellings, which should run to a maximum of €3,800, with up to €2,200 more if the design is inadequate and compliance issues need to be addressed.

A final option would involve exemptions for house extensions under a certain size.

The review will also consider the impact of the 2014 regulations on owners and occupiers of buildings in relation to issues such as public safety, accessibility, energy efficiency, and good building practice. Submissions can be made at buildingstandards@environ.ie by May 15th.