Keash – where a bag of turf buys you a pint 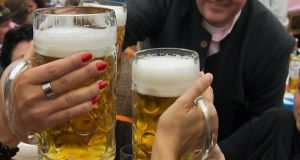 Barter for beer: a pub in Keash, outside Ballymote, Co Sligo, offered a pint for a bag of turf at the weekend. Photograph: Joerg Koch

In a throwback to old-fashioned ways, patrons of the only pub in Keash, outside Ballymote, Co Sligo, got their pints and spirits for a bag of turf at the weekend.

A four-stone bag of good turf sells in the area for about €4. Patrick Ward, owner of the Fox’s Den, estimated his night of bartering and swapping pints for turf was good business.

His pint sells at €3.90, so he had an average profit of 10 cent per drink and he doesn’t have to pay to stock up with fuel to keep his two fires burning this winter.

Locals – and people from further away – came into the pub with hefty bags of turf. Liam Powell, his wife Jane and cousin Noel Hannon deserted their own local at Gurteen, 8km away, so they could drink for a few bags of turf.

Pack your bags
“We usually do our drinking in Gurteen but when we heard about this we packed our bags of turf and came for the craic,” said Liam.

Ward said the idea for a night of swapping pints for turf came from a customer about a year ago. He decided to go ahead with it for one night this year.

“It’s the start of winter and it creates a good buzz with people,” he said. “Of course, there’s also a more serious side to it. Pubs have changed an awful lot in the past 10 years and country pubs especially have a struggle to keep going.”