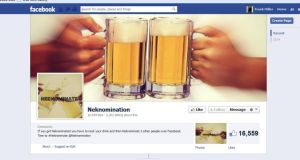 A Northern Ireland judge who was filmed engaging in the so-called fad of neknomination by downing a shot of alcohol at a family event has apologised for her “foolish behaviour”.

A Northern Ireland judge who was filmed engaging in the so-called fad of neknomination by downing a shot of alcohol at a family event has apologised for her “foolish behaviour”.

Judge Rosemary Watters has not been suspended because of her action but the North’s Lord Chief Justice Sir Declan Morgan is investigating the incident.

Judge Watters, who serves on the district or magistrates court – similar to the district court in the South – was filmed drinking what is understood to have been a shot of vodka or tequila at a family event last month and then in reference to a person whom she names saying, “I neck and nominate you.”

Judge Watters (48), who operates mostly in the Lisburn and Craigavon court areas, has been involved in a number of high-profile cases including those concerning dissident republicans facing serious charges that were referred to the higher crown court.

“The video was taken at a family event. Judge Watters recognises her foolish behaviour and would discourage anyone else from repeating what she did,” said a statement from the office of the Lord Chief Justice.

A spokeswoman for his office said an investigation is under way. “The Lord Chief Justice is aware of the video and has noted that the judge recognises her behaviour was foolish. He will be making enquiries,” a statement said.

In reference to a query on whether Judge Watters was suspended a statement from Sir Declan Morgan’s office said, “The Lord Chief Justice can only suspend a judge on the recommendation of a statutory tribunal. He can, however, instruct a judge not to sit but he has not done so in this case.”

Judge Watters was not at work yesterday because she had longstanding pre-booked leave, said the spokeswoman.

The incident has triggered widespread publicity and comment in Northern Ireland with one legal source remarking, “I think this shows just how dangerous the internet can be.”

The 15-second footage of Judge Watters engaging in neknomination comes shortly after the death of Jonny Byrne from Co Carlow was linked to the craze.

Dublin High Court judge Paul Carney this week warned that if such internet drinking competitions continued they would lead to a “tsunami” of homicide and rape prosecutions before his court.

He made his comments as he was sentencing a 38-year-old Waterford man who, after drinking six to seven pints of beer, raped an acquaintance having offered her a lift home from their local nightclub.