Italy is most popular country for wedding vows 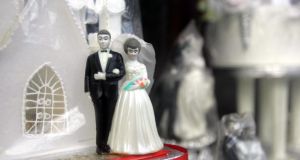 Sint Maarten in the Caribbean, Lesotho and Kazakhstan, are among the countries where Irish people chose to marry last year.

The small Caribbean island of Sint Maarten, the landlocked African country of Lesotho and the former Soviet republic Kazakhstan, are just some of the countries where Irish people chose to marry last year.

There were 3,099 civil letters of freedom issued last year for 99 countries, according to the Department of Foreign Affairs.

The documents state a citizen is free to marry and are required by some, though not all, jurisdictions before a person may marry or enter into a civil partnership.

Of the 3,099 letters, 44 were provided for people entering into civil partnerships.

Italy was the most popular country accounting for 23 per cent of letters issued, ahead of Spain on 12 per cent and Malta on 6 per cent.