Irish as ‘happy’ as during Celtic Tiger, research finds 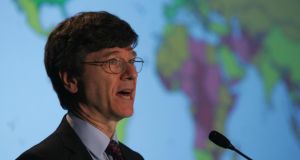 Professor Jeffrey Sachs, one of the authors of the World Happiness Report.Photograph: Bryan O’Brien/The Irish Times

The recession has barely affected Irish people’s sense of well-being, an international survey has suggested.

The performance of Ireland is in marked contrast to that of the other so-called PIIGS (Portugal, Ireland, Italy, Greece and Spain) who are all singled out as having experienced a dramatic fall in happiness since the Eurozone crisis blew up.

Greece experienced the biggest fall and is now ranked 70th in the world and second only to strife-torn Egypt in terms of how much more discontented its people are than they were between 2005 and 2007. Spain also experienced a huge fall in the happiness value.

The figure will come as a surprise to most Irish people who would assume that Ireland is a much more unhappy place than it was during the times of plenty.

The report is compiled by the Earth Institute at Columbia University in New York. It measures variables such as health and longevity, income and productivity and social solidarity using the survey results of different countries to arrive at the results.

Report co-author John Helliwell said economic well-being was only one measure of happiness and on many others Ireland scored very well. He said Ireland’s result was “remarkable” given the financial crisis.

“This is just one more illustration that people’s happiness depends to a much smaller extent on their income than they think it does,” he said.

Some 97.1 per cent of Irish people had somebody they felt they could rely on in times of troubles, the second best in the world, which has improved from 96.7 per cent between 2005 and 2007. This, he said, was a “very important variable” at a time of economic hardship.

Such a phenomenon was also evident in Iceland which ranks 9th in the world despite suffering an economic implosion similar to Ireland. It also scored highly on the indicator of social solidarity.

“This suggests a society that is much more likely to work together rather than become fractious when they are dealing with a problem. If Iceland wasn’t there as a comparable example, I’d be less assured that it is real,” he explained.

However, Mr Helliwell said the figure, which suggested more than 90 per cent of Irish people still felt control of their destiny, was “remarkable” and much higher than most countries in the world.

The extent to which people perceived Ireland to a corrupt country increased from 0.473 to 0.5956 in the same period, the equivalent of just under half to 60 per cent of people who felt corruption was weighing on the sense of national well-being.