State lags behind on government spending and affordability 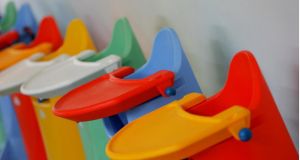 Ireland ranks 18th overall in this 2012 study of 45 countries, behind most EU states with the exception of Hungary, Greece and Poland.

Ireland differs in terms of its childcare provision with other developed states in many ways but in one particular way it stands out – for its low levels of public spending on the sector.

Figures from the Organisation for Economic Co-operation and Development show Ireland spends less than 0.2 per cent of its GDP on care and education for preschool children.

With well-funded state-led systems of childcare, the Nordic countries dominate the top spots for childcare provision.

An Economist Intelligence Unit study last year on early education showed such states had a childhood development strategy, backed up with a legal right to such education and the participation of all children in at least a year of preschool, with nearly universal enrolment between the ages of three and five.

Subsidies
The study also noted the existence of subsidies to ensure access for underprivileged families and found that when care was privately run, it was affordable for those on average wages. Nordic states also had mandatory qualifications for staff; a well-defined preschool curriculum and health and safety standards; good parental involvement and children going to preschool healthy and well nourished.

Ireland ranks 18th overall in this 2012 study of 45 countries, behind most EU states with the exception of Hungary, Greece and Poland.

The provision since 2010 of a free preschool year for children has meant Ireland has shown an improvement in the availability of childcare, where it ranks 12th. It ranked in 14th place when assessed on quality of childcare but the big falldown for the State in the Economist’s ranking is on affordability, where it drops to 29th place.

OECD figures show just how much childcare costs take up of an Irish family’s income after taxes: 29 per cent of a dual income-earning family but 52 per cent of a lone parent’s net income.

Campaigners in the sector are urging a public debate on increasing the State budget for childcare, saying investment in young children saves costs in the long run, especially for disadvantaged children.

“Countries that invest more have a different tax model. Is there a political will here to increase taxes and fund this sector?” asked Irene Gunning, chief executive of Early Childhood Ireland.


First step
The first step in providing good quality childcare is for society to agree that it is an important service, says Dr Eva Lloyd, who teaches at the University of East London and has conducted research into early childhood education. Having a Constitution that places an emphasis on women’s role in the home implies Ireland has not arrived at that agreement, she adds. “If you start at that level, whatever non-parental service you put in place may be at a disadvantage,” says Dr Lloyd.

A European Commission study in 2009 examining attitudes to institutionalised childcare showed that in Ireland “choice is highly limited and choices are constrained by high costs and a lack of flexibility” .

By contrast, in Denmark the “use of childcare is the norm”.

As Ireland scrambles to find a way to improve the quality of childcare, it could be aided by the EU, which is setting benchmarks on enrolment rates and is trying to help identify what works best. The EU may also be of help with funding: states can now apply for structural funds for training childcare staff.