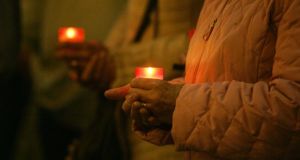 A woman holds a candle during a vigil at College Green, Dublin, remembering those lost to suicide

Ireland has exceptionally high rates of suicide among young males and females but lacks a national strategy on prevention, a Europe-wide report on injuries sustained by children as a result of violence has found.

The report is the first to comprehensively assess national strategies that address child intentional injury across the EU. It examines child maltreatment, peer violence and self-directed violence which are regarded as the three main areas of violence against children.

The European Child Safety Alliance report found that despite the high suicide rate here, Ireland does not have a national strategy for the prevention of suicide and self-directed injury.

Dr Staines said Ireland does not have “a full range of measures in place to minimise intentional injury in childhood, though we are better in this respect than many other countries.”

“Intentional injury in childhood is often a hidden problem and needs much more attention from Irish and European societies,” he said.

Of the more than 35,000 children and adolescents aged 0-19 years who die each year in the EU, about 24 per cent or roughly 9,100 deaths are due to injuries. Of these, about a third are classified as intentional or of undetermined intent.

There were 600 deaths of people under the age of 25 recorded in Ireland in 2012. Of these, 195 of were due to external causes, 101 were accidental and 94 were intentional or unknown (mostly suicide).

Ireland had the highest rate of female suicide across the surveyed countries at 2.09 per 100, 000. This compares to an average across 28 EU countries of 0.84 and is 19 times greater than the lowest rate of 0.11 in Greece*.

The figures used in the study are based on data from the World Health Organisation’s European detailed mortality database from 2009 to 2011.

Ireland compares well with other countries in some policy areas and is one of only four countries to have either a national programme of multi-disciplinary child death reviews or regional programmes across the whole country in place.

In general, the report finds that the resources put toward combating child intentional injury do not take account of the magnitude of the issue, considering the life-long impact that violence can have on children.

It calls for improved leadership to make intentional injury prevention a priority; better provision of detailed mortality data and the introduction of national coordinating frameworks and plans to prevent intentional child injury.

“It is clear that preventing intentional injuries is an investment that will save money both now and in the future and efforts must be made to ensure investment are at minimum maintained, if not increased, during the current economic crisis. The decisions made today will ultimately affect future generations of Europeans,” the report says.