Survivor of prostitution describes being repeatedly raped, of being urinated on 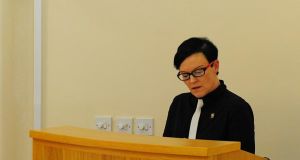 “In prostitution a woman ceases to be seen as a human being in the eyes of others and becomes a trapped mind that lives in a body that no longer belongs to her,” said Mia de Faoite, a survivor of prostitution. Photograph: Lisa Cawley

A survivor of prostitution had described being repeatedly raped, of being urinated on, having objects inserted inside her, and how in the end prostitution brought her to her “knees”.

Mia de Faoite, addressing yesterday’s seminar, told how she got drawn into prostitution on Dublin’s Burlington Road, to pay for heroin, from 2005 to 2010.

“In prostitution a woman ceases to be seen as a human being in the eyes of others and becomes a trapped mind that lives in a body that no longer belongs to her...I used [heroin] to block out what I had become but I witnessed the deterioration of other women over the years.”

Her first of three rapes was when she and another woman were gang-raped in December 2005. They were ‘working’ at a Christmas party where drugs and alcohol were taken.

“We were raped, both anally and orally. We were like ragdolls...just objects to be passed around. I looked at my friend and I couldn’t protect her. She was much younger than me, much thinner, I looked at the man on top of me. I looked straight into his eyes. I thought, ‘You can’t see me, can’t hear me’...He looked straight through me.”

Ms de Faoite said the other young woman, Jenny, died of an overdose two months later, her drug use having spiralled out of control.

In the end she exited prostitution after a social worker helped her take the first steps.

She said legislation to criminalise those who purchase sex was necessary.

“Prostitution is not compatible with humanity and we choose one or the other.”